The Roman Church breaks away

A guest post from the German bishops, with additional material from Fr James Martin LGBTSJ, Cardinal Cupich, etc. We are deeply sorry that a small Roman sect has decided to split off from the universal German Catholic Church by refusing to bless same-sex relationships, to ordain women, or to support abortion. From now on we can only regard Pope Francis, the Congregation for the Doctrine of the Faith, and those backing them as schismatics, Protestants, and general Schweinehunden. In the words of St John of Lennon's Hymn "Imagine", which we sang when we blessed some happy couples this week: 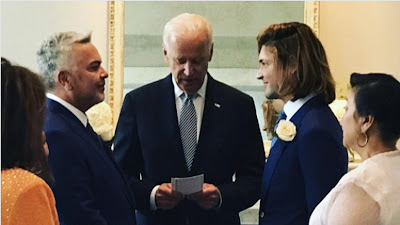 Fr Joe of the German Catholic Church says "I now pronounce you Thing and Thing." In the middle ages, the Spanish Inquisition was a byword for brutality, but you ain't seen nothing yet, Francis! The German Inquisition will be much more savage. Already our top agent, Cardinal Kasper, is in Rome and preparing to act. Admittedly he is 96 and talks to trees, but that doesn't stop him striking terror into the hearts of Roman schismatics! Time for some more "Imagine": You Roman Catholics may be proud of your Marty Haugens, Dan Schuttes, and Graham Kendricks, but we have John Lennon on our side, so be very afraid! 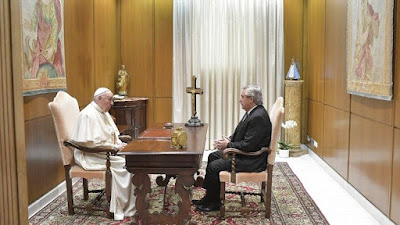 A worried Pope Francis gets advice on Peronist dictatorship from the President of Argentina (or vice versa).
Posted by Eccles at 13:49