The sex life of the Jesuit

We are grateful to Fr James Martin for drawing our attention to a survey which claims that "...same-sex behaviour is bound up in the nature of animal sex. It hasn't had to continually re-evolve: It's always been there."

Fr Jim is of course mentioning this as part of his campaign to get LGBT stuff accepted as normal, natural, not sinful, just as good as heterosexual behaviour, perhaps even better, how dare you boycott our Pride marches, let's make sure children learn about it from an early age, ...you bigots!

So we decided the time had come to write about the sex life of the Jesuit, a creature which evolved comparatively recently from the ape kingdom (1534 or thereabouts), and was known initially for its spiritual exercises, which later evolved into Ignatian yoga. 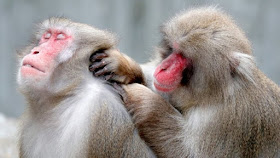 Jesuits are a male-only species, so it is not clear how they manage to breed (possibly, they are born as mutations from other humanoid species). They often live in single-sex communes, and - if we are to believe Fr Jim - they enjoy a perfectly natural sex life.

The dominant male of the pack (sometimes called a pope, superior general, or perhaps bishop) is usually an old man, and he does not normally engage in any activity beyond the uttering of incomprehensible grunts and the worship of strange objects. The younger Jesuits swear an oath of obedience to him, after which they are free to engage in single-sex activities. The more active Jesuits are often engaged in struggles for dominance, and it is said that they bend the youngest members, the seminarians, to their will. Sometimes they carry them off to their lairs (for example, beach houses) in order to practice "discernment" with them. 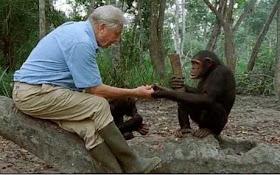 Natural Historian David Attenborough does the "sign of peace" with a Jesuit.

Jesuits are attracted by bright colours, for example rainbow-themed clothes, but are commonly seen dressed in black. Sometimes they can even be mistaken for human beings, at least until they start talking.

Since this is a family blog, we shall not go into the sordid details of their rituals (no doubt there is a David Attenborough television programme about them), but if we mention the words "accompaniment", "discernment", "spiritual exercise" and "missionary", I think most readers will know what I mean.