Eccles has a papal audience

So I took part in a Tablet competition, and won first prize.

Put the following qualities of Pope Francis in order of importance:

The first prize was a 10-second audience with the Holy Father (the second prize, a 30-minute audience, was won by Fr James Martin SJ). 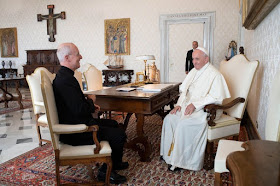 "Drone... drone... LGBTSJ... building bridges... rainbow underwear... the Bible is wrong... don't you think I look a bit like a priest... pride... Mary Magdalene was a lesbian... I'm transitioning next year... change the catechism... gay fashion show in the Sistine chapel... shall we do some Ignatian yoga now?"

The audience involved turning up in St Peter's Square on a Wednesday morning and listening to a Bible reading and a papal homily, first in Italian, then translated into other important languages (this week it was Orcish, Klingon, DA-LEK, and Anglo-Saxon). Then the Holy Father would come round and greet people personally. 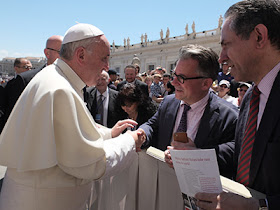 At last I was treading in the steps of Austen Ivereigh! 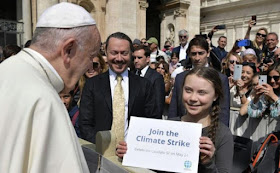 I didn't have a book to sell, or a political campaign to wage, so I took along a printed copy of this lovely blog for the Pope's edification, with the pieces on "How to be a Good Pope" highlighted.

What do you say to a Pope when you meet him? "You is not saved, only I is saved"? "Any answers to the Dubia yet?" "Sarah for Pope!"? I chickened out and said simply "Hello, how's the Poping going? Does it pay well?"

And then Pope Francis, successor to St Peter, and big cheese of the Catholic Church, deigned to give a personal message to me, a humble blogger. "SHUT UP, ECCLES!" he said, and I knew I had made a hit with him.