Amazonian pagans complain about the synod

Although Catholics as a whole have been very supportive of the Amazon synod, which started this week (where have you been, Eccles?) some disquiet has been expressed by the Amazonian pagans who were invited to take part. 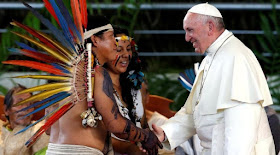 Can the Amazonians trust Pope Francis not to be too Catholic?

Said a spokesman, known to his friends as Wise Spirit of Yucca, "We were promised a synod fully compatible with our beliefs, but elements of traditional Catholicism keep creeping in. For example, the Big Chief Pappafranco, who was expected to dress in traditional warpaint and feathers, keeps insisting on wearing a white gown. We can only described this as 'rigid'." 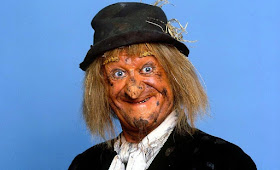 A synod participant, who listens to the wisdom of the crows.

His colleague, Holy Earth mother Kapok, added, "The Catholics also showed themselves totally unable to get into the spirit of idol worship that is the basis of our culture. It is true that they politely bowed down to our fertility symbols, including the naked wooden idol Austeniveri, but their own idols are totally blasphemous - they wear clothes, for one thing, and have been given the names of western imperialists such as Peter and Paul." In a desperate attempt to save the Synod, Pope Francis has agreed to appease the spirits of Mother Earth, to talk to the trees, and to listen to any questions ("Dubia") they may have to ask him. Which is more than his cardinals have managed to accomplish. 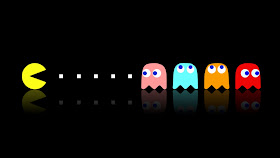 Pachermanna, the Amazonian god. Why no place in Catholic liturgy?

LATE NEWS: A Catholic baptism goes horribly wrong, when it is discovered that the font was filled with piranha fish.

Cardinal Hummes agrees to conduct a human sacrifice, in honour of the wise spirits of the swamp, just as soon as Archbishop Viganò hands himself in.