The martyrdom of St Donna

1. And there was a man sent by God, called Donald Wuerl, who was made a prince of the Church; he was known to all as Donna, although no man can guess why.

2. And this man had an uncle, named Ted, who was a notorious evil-liver, yeah his deeds caused fear and disgust among all the young people with whom he came into contact. 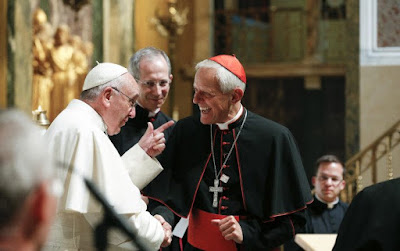 "You're fired! But keep up the good work."

3. But Donna, when he took over as ruler of the town of Wash-ing, knew nothing of the deeds of Uncle Ted.

4. For to the pure all things are pure, as well as to those who prefer not to look for trouble.

5. And yet, even when Uncle Ted had gone to a better place (his beach house), there was still much evil in the town of Wash-ing, and the high priests committed foul deeds.

6. And Donna knew of these evil priests, and carefully moved them around every time they were caught.

7. Hence the expression "La Donna è mobile," that is to say, "Donna likes to move them round."

8. Now when Donna was much advanced in years, he tendered his resignation to the Holy Father, he that was called Francis.

9. But Francis said "Let Donna continue in his wickedness, for he is one of us."

10. "For when Judas Iscariot tendered his resignation, did not Peter exercise mercy and say, 'Thou mayst continue as a disciple until someone notices'?"

11. However, one day it became inevitable that Donna should go. For the Jury that is Grand had begun to beat upon the doors of the town that is Wash-ing.

12. And so Francis said farewell unto Donna, weeping to lose such a faithful servant. 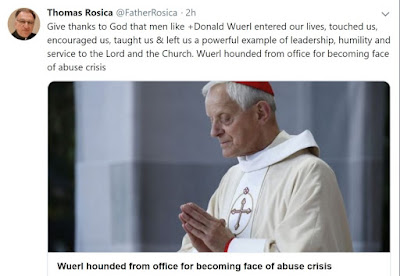 Where exactly did he touch you, Rosie?

13. And everyone said, "What a saint that man was. How could we lose such a wonderful shepherd of his sheep? Was he not hounded out of office?"

15. But others said, "Oh yes we shall. Remember Cupich, and Farrell, and Tobin?"