With apologies to P.G. Wodehouse.

Regular readers of these chronicles will know that six years ago, my Uncle Cormac, tired of seeing me lounging around all day, said "Bergie! It's time you got a proper job, so we're arranging for you to become Pope. You'll enjoy it - the Cardinals Club is just like the Drones Club."

Unfortunately being Pope isn't just a matter of saying prayers and looking humble, although that's part of it, and I kept getting into scrapes. For example, my Aunt Dahlia, who used to run a lady's magazine called Milady's Boudoir, asked me to dash off a piece on "How to be a great lover". Since I am Pope, I gave it a Latin title, Amoris Laetitia, and cobbled together a few tips from the works of D.H. Lawrence, Casanova, and Bingo Little's wife Rosie M. Banks, the writer of romantic novels.

However, the critics panned it. Indeed old "Beau Brummell" Burke of the Cardinals Club got together with some mates to send me some thorny questions about the article. Luckily the letter was taken away by "Sniffer" Cocco, who said something about dropping a line, although I hadn't really thought of him as a great letter-writer. 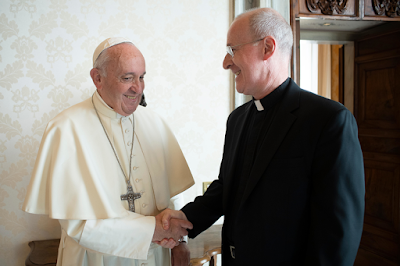 Recently my luck changed, and James entered my employment, as manservant, valet, spiritual adviser, and physical trainer. The story starts with another of my failed literary ventures, which was originally intended as a jolly children's story about a water-rat, a mole, a badger and a toad, until I realised that this had already been done. So I threw half the pages away and renamed the rest Laudato Si'.

Some time after the publication of Laudato Si', I got a call from "Baldy" Baldisseri of the Cardinals Club explaining that he was organizing a synod, and perhaps I would like to attend. "We're all dressing as Amazonians, but you can come as you are, Bergie, if you don't have a costume. Bring a bottle!"

At that time, James and I were having a slight disagreement. James had been trying to add a touch of colour to my usual white suit - "A rainbow cummerbund would suit you very well, sir, and show that you are hoping to build bridges." However, on this occasion I asserted my authority, and James retired in high dudgeon, telling me that "He who fights and runs away will live to fight another day. Demosthenes."

I had never heard of his pal Demosthenes: probably he's one of those New York Jesuits that James knows intimately. Still, I had won that round. 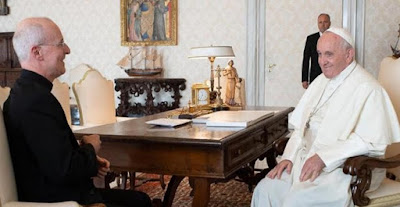 Anyway, I went along to Baldy's synod, and was slightly surprised to see everyone bowing to an ugly-looking wooden statue. James was there serving drinks, and I asked him what the statue was. "I could not say, sir," he replied. "Mr Ivereigh is telling people that it is Our Lady of the Amazon, but he also maintains that it represents Miss Madeline Bassett. Her disciples believe that the stars are God's daisy chain, that rabbits are gnomes in attendance on the Fairy Queen, and that every time a fairy blows its wee nose a baby is born."

"Is that really orthodox Catholic doctrine, James? I'm a bit rusty on it."

"I fear not, sir, although it is one of the aims of the synod to get these teachings accepted as infallible by the Church."

"Hey, I know all about this. When I took over from Uncle Ben, he told me, 'You are allowed to make infallible statements, Bergie, but you're such a numbskull that I really wouldn't advise it.'" 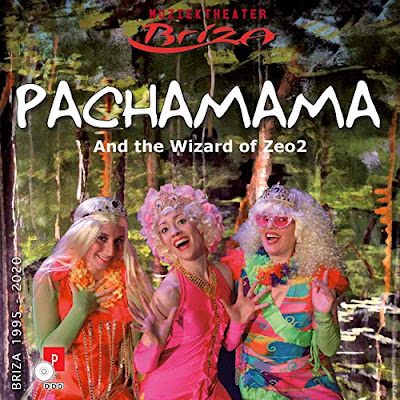 I thoroughly enjoyed the party, but the next day, when James shimmered in with the papers, I could see that I was in a dreadful fix, and it would need all James's ingenuity to help me extricate myself. The headlines read: