Some readers may have heard of a nasty virus that is going the rounds at present, and wondered why this has been sent to us. Is it a punishment for eating too many bats? Is it the result of a biological experiment that went wrong? Perhaps God has decided to smite us for worshipping Pachamama, organizing LGBT "retreats", or simply trying to change the words of the Lord's Prayer?

No, you're all wrong. According to a well-known Catholic, Pope Francis, it is Mother Nature throwing a tantrum.

This all seems so dreadfully unfair. We have all bowed down to Mother Nature. Why we even had a special synod at which idols of Pachamama (identified by some as a symbol of the Nature, and by others (Austen Ivereigh) as the Virgin Mary) were treated with great respect.

We have canonized her prophet, St Greta the Absurd, who has shown her holy nature by contracting the Coronavirus and recovering from it in 50 minutes. 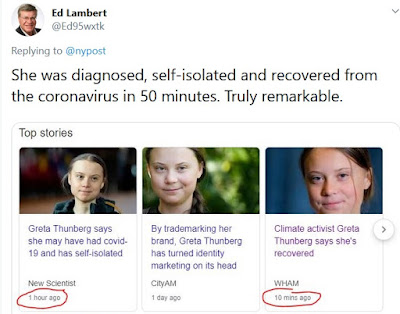 The Miracle of St Greta the Absurd.

No, but you know who is to blame for the pandemic. It was Baron Alexander von Tschugguel zu Tramin, the human fiend who gave the Pachamama idols an early bath. (He was punished for his blasphemy by catching the illness himself, but now seems to be on the mend.)

St Austen the even more absurd weighs in.

Anyway, you have been warned. Do not offend Mother Nature. Remember that, apart from Amoris Laetitia, the sacred encyclical Laudato Si' is the greatest work of Catholic theology to be written since Vatican II told us to throw away our Latin texts and take up liturgical dancing.

Forget the Annunciation: there's a new Mother on the block! 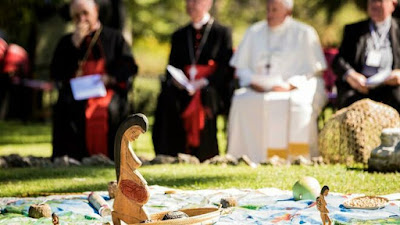 It's no coincidence that Pope Francis dresses like a druid.

UPDATE: Mother Nature has been sent to her room, without any dinner. Any more human race-destroying tantrums and we'll tell her to tidy up the Earth!