Breaking my Lenten fast to report some hot news. E.

Catholic Airlines have apologised for dragging Pope Francis off their flight to Heaven, and suggesting he travel by Air Luther instead ("you'll feel much more at home there," said one member of staff). 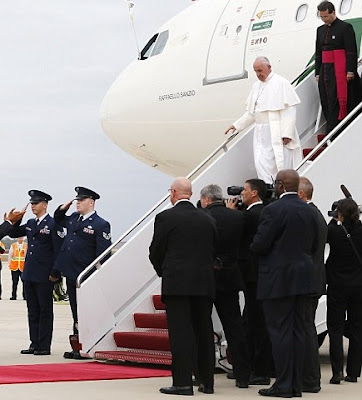 According to reports, four cardinals led by Raymond Burke joined the flight at the last moment, and it was therefore necessary to remove four less "saved" passengers. The computer selected four people who were regarded as being of low priority: these included Fathers Spadaro, Rosica and Martin SJ, all of whom were described as part-time Catholics in the media profession. They agreed to leave peacefully on being offered a recompense of 30 PAG (30 pieces of silver, worth approximately $800). However, the fourth passenger selected, Pope Francis, refused to budge. 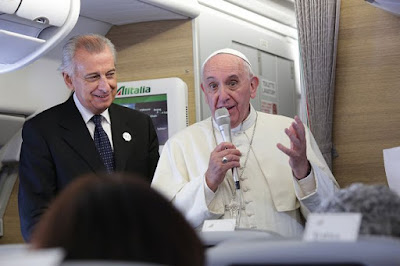 "I don't mind standing throughout the flight!"

It seems that Pope Francis had proposed to stand throughout the flight, entertaining the captive passengers with new revisions to the Catholic Magisterium, but this was against civil aviation regulations, and the offer was refused.

Late news: Air Luther's flight to Heaven has been diverted to another airport, Purgatory International, where passengers may be expected to wait for a few hundred years before going on to their final destination. The only light reading available will be a complete set of Vatican II documents.