With a fine piece of trolling, Cardinal Müller, formerly of the CDF, has managed to leave egg on the faces of a variety of commentators, including Cardinal Kasper, Professor Massimo Faggioli, and Austen Ivereigh-Tusk.

Explained Müller to us: "I am on a hit list of cardinals whose every word will be attacked by those whose mouths are bigger than their brains (others on the list include Burke and Sarah). I therefore produced my "Manifesto of Faith", consisting of excerpts from the Bible and the Catholic Catechism (documents with which my critics aren't very familiar), knowing that some people would jump on them." 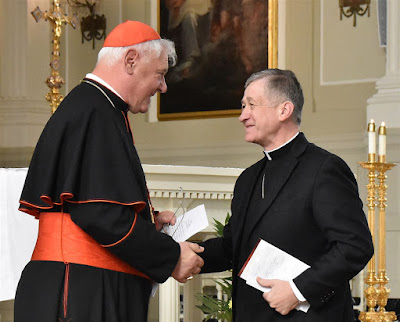 I was hoping to catch Cupich as well, but so far he hasn't fallen for my trap.

Cardinal Kasper made some interesting comments, likening Müller to Martin Luther (actually, Wally probably thinks this is a compliment), and also moaning about half-truths and blanket statements. ("Jesus said that a man can only have one wife. This is a half-truth, as in fact he can have two!" said Kasper, sticking straws in his hair.)

Another commentator, Philip Pullella, decided that Müller's insistence on Catholic doctrine was a "thinly-veiled attack on the Pope". It is true that the Manifesto starts with "Let not your heart be troubled!” (John 14:1), which is definitely a sentiment that is not too popular in the Vatican. In fact the great Fr Tim Finigan, an old friend of this blog, came up with a brilliant comment that Pullella would no doubt appreciate:

Elsewhere the great theologian Massimo "Beans" Faggioli was also caught in Müller's web, when he labelled use of the Bible and CCC as "spreading dissent" and wondered whether the CDF could do anything about this scandalous outbreak of Catholic doctrine among cardinals. Moreover, Austen Ivereigh-Tusk (cousin of Donald) referred to "a naked power play", but this may have been because his mind was wandering when he heard Dr Victoria Bateman, the stripping don, speak about Brexit on Radio 4. 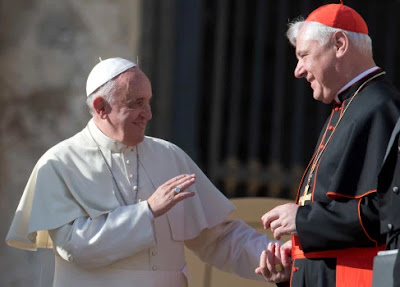 Still, we must congratulate Fr James Martin LGBTSJ, who, like Cardinal Cupich, has so far not fallen into Müller's trap of criticising the Bible and CCC. Sometimes it is better to remain silent and be thought a fool, than to speak out and leave no doubt about it.