Arriving at the quarter-final stage of the World Cup of Francis Achievements, we are left with eight truly memorable accomplishments. Now, some people who saw this World Cup in action accused me of attacking the pope in some way, but this is very unfair, as I did not say whether the entries were to be regarded positively or negatively. In the end, they are all positive! Let me come clean, and say that I am a huge fan of "Peter" and am hoping to get a job writing for the blog "Where Peter is Wonderful", which explains that the pope is always right, even when he is wrong. So let's analyse the eight quarter-finalists in detail. (Actually, not all the polls are closed yet, but it is now fairly clear who will win.)

"My new book, Pope Francis the great achiever, will have eight chapters." Traditiones Custodes. Surely one of the jewels in the crown of Pope Francis's reign. Those nasty divisive traddies, who wanted to use the Extraordinarily Good Form that their grandparents knew, were clearly causing discord, schism, hatred, loathing, traumas, etc. by refusing to learn vernacular and celebrate the Novus Ordo in Tower of Babelese. We know that Pope Francis got it right, as those who object to TC are already saying that it has caused discord, schism, hatred, loathing, traumas, etc. Francis the blessed peacemaker knows that the best way to achieve peace is to get your retaliation in first! Who am I to judge? Yet again, the Wonderful Father has hit the nail on the head. The full quotation is "If a lot of miserable sinners call themselves Catholic and find that repenting is too much of a bother, who am I to judge?" We Bergoliolators have noticed that Pope Francis never judges. Well, except when he says people are too rigid, or fomenters of coprophagia, or self-absorbed Promethean neo-Pelagians - or when he hates them simply because they supported the wrong side in the Falklands War. So let sin thrive! Amoris Laetitia. Pope Francis has written the definitive treatise on Catholic morals. Although the ideal family has two parents of either the same or different sexes, together with 2.3 children and a white cat called Tiddles, not all families can achieve this, and some find that an adulterous lifestyle is more convenient. Mr Mercy has understood this, and reassures them that with the aid of discernment, walking together, perhaps some Ignatian yoga, their needs can also be accommodated. 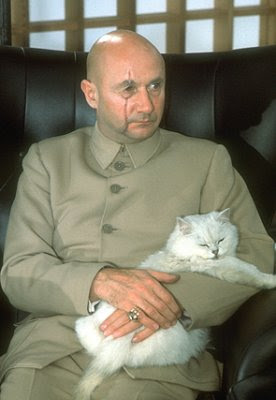 An ideal father. The Church in China. One of the great successes of the Stupendous Father. No longer are bishops to be appointed for their spirituality, wisdom, orthodox beliefs and "good shepherd" qualities - and look how well that turned out in the west! - but the title of "Bishop" is now a grade in the Chinese Civil Service, just above Head Jailer and Assistant Torturer and just below Lord High Executioner. Some people will say that having all Catholics driven underground on pain of arrest is a bad thing, but Francis knows best. In the west, few bishops have torturing skills (Wilton Gregory, Declan Lang, a few others?) and we need more! Pachamama worship. This has been criticised by a few fascists who persist in sticking to the old ways. It is now generally agreed that Pachamama is not the Mother Earth Goddess - and who would complain if she were? - but simply another version of the Blessed Virgin Mary. Or she may be a vision of Greta Thunberg, five years from now, expecting a bonny bouncing carbon-free baby. Whoever she is, she is not to be thrown into the Tiber. That commandment on having "no other gods but me" is a bit stale now, isn't it? Obviously different Catholics will prefer different gods! The Abu Dhabi statement. There was much brilliant material in this declaration: for example an agreement that "We Catholics will not stab Muslims in the street if your lot don't stab us (however, we can't speak for the Quakers, who are notorious oat-fuelled fiends)." But the bit that got people talking was where Pope Francis explained that God doesn't particularly favour the Christian religion, and He prefers a bit of diversity. So there's really not much point being a Catholic after all. This is true HUMILITY from the one man who you would expect to stick up for the Catholic Church. 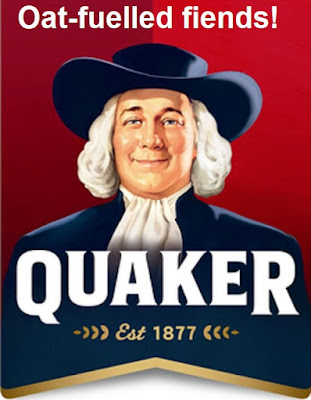 Not covered by the Abu Dhabi agreement. The German synodal path. Synods are wonderful things, which is why we shall soon be holding a Grand Ten-year Synod about the synodality of synods about synodal synods. So the German Synodal Path (or as they so elegantly call it Der Synodalerkardinalmarxderdickemannhatzuvielewürstegegessenweg) really puts the "syn" in Synod! Everything is up for grabs - new ideas on sexual morality, women priests and bishops, and a total rewriting of Catholicism from scratch to get rid of the embarrassing bits! This is of course a precursor of other synodal paths - new rules depending on where you live (see also under "China", "Pachamama" and "Abu Dhabi"). Now this is not schismatic, oh no, far from it. Because nobody will be using Latin. Rehabilitating Uncle Ted McCarrick. Look, Ted's just this guy you know? He may have got himself into a spot of trouble, according to a brief 449-page report, but Pope Francis took a very firm line on this, rushing to laicise him only five years after he found out about it. Francis had obviously made him a trusted adviser because Ted knew more about sexual abuse than anyone else - when you need information, go to the experts! Uncle Ted is now living quietly in retirement, hoping to be sent to a prison that has its own built-in beach house. A happy ending for everyone! 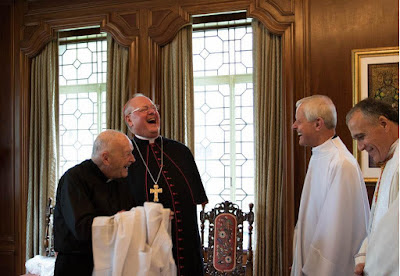