"The tiger who came to Rome" condemned by activists

Critics have accused the classic novel "The tiger who came to Rome" by Austen Ivereigh, of sexism, encouraging violence against women, and reinforcement of liturgical inequality. 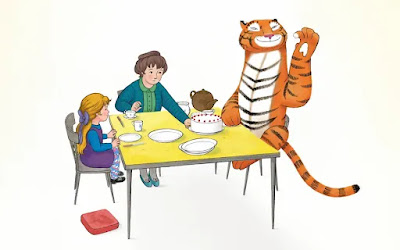 A shocking scene from the book. The book tells the story of an exotic creature from South America which invites itself into an ordinary Catholic Church and promptly proceeds to devour everything in sight: the traditional Magisterium, the faith, and even some of the most-treasured liturgy. Sexism is apparent in the book, since most of the tiger's friends are men (although over half are Jesuits, as a token gesture to LGBT equality). However, there are unpleasant scenes of liturgical bullying, as the Rome family discovers that all the liturgy has been chewed up by the creature. Should our children be exposed to violent scenes like this? The author, Austin Ivereigh, has denied that there is a darker meaning to the story, although many Catholics have found themselves unable to sleep at nights thinking of everything the tiger might do. "It's just a dumb animal," he says, "and it does what dumb animals have to do."
Posted by Eccles at 12:46