The Debate of The Century 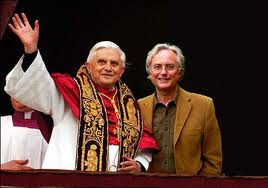 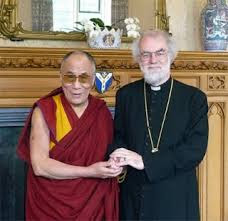 And that's the theologian, Rowan Williams (right), with a poor beggar who does't have any proper clothes.

The referee is Sir Anthony Kenny, who is a black belt in Judo, and able to stop the two protagonists from killing each other. 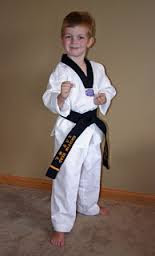 
Dawkins: Let me say first of all, as a trained biologist, that snakes cannot talk. I wrote a thesis in animal behaviour, and spent 3 years trying to persuade a serpent to say "Yea, hath God said, Ye shall not eat of every tree of the garden?" but it never got further than "Dawkins, you're an idiot." See? I've refuted one of the main tenets of your faith. Admit it, Beardie. Go on, admit it.

Williams: Thank you, Richard. May I say that this is a most useful and constructive contribution to our dialogue. In one sense, are we not all struggling to articulate an awareness of our own idiocy? Let me bring in philosophy for a moment.

Dawkins: Philosophy? That means "stamp-collecting," doesn't it? I've never had any time for it.

Williams: Well, in a very real sense it means that. But, if I may go further, it is also to do with the fundamental problems of our existence. Are we really here? I may be sticking my neck out here, but I like to think that, in many ways, there is something to be said for the theory that we are.

Dawkins: Talking of stamps... when I put a letter in a red box and it is magically transported to another place, am I supposed to deduce from that the existence of a postman? No, it is the genetic code in the envelope causing it to move of its own accord.

Williams: Perhaps I could venture to bring in Jesus Christ here, since we were talking about religion earlier?

Williams: Well, He appears later on in the Bible, and in a very real sense may be regarded as a somewhat relevant and meaningful person in the context of Christian thought.

Dawkins: Oh I stopped reading after Genesis. What a load of rubbish that was. What's the point of it? It was written by King James in 1611, anyway. What did he know about evolutionary biology? Look, we were all living in the Dark Ages until Darwin came along with his ground-breaking book called, um, "The Origin of the..." er... Oh my God, what's it called... it's on the tip of my tongue...

Dawkins: Yes, I like making speeches, and love having huge crowds of adoring teenagers saying "Richard, how can one man be so brilliant?" Have you ever read Genesis? That God chap. What a monster, eh? Took Adam, ripped his rib out, and made a woman out of it. When I was a research biologist I was able to show that it wasn't possible to make a whole woman out of a man's rib. All I could make was a rather nice table lamp. And even then I had to buy the wires and the bulb. Well, that proves that you Christians know nothing.

Kenny: We're going to have to wrap this debate up soon, but do you have any final philosophical points to make? Does Occam's Razor tell us something?

Williams: Ha ha, I'm afraid I don't use Occam's Razor. And when I read the works of Bernard Shaw, I realised that Shavian philosophy was not for me either.

Dawkins: Well, I must be toddling off now, I've got a "Dawkins Youth" rally to attend. Don't think I'm one of those dreadful atheists, I'm just a humble agnostic who wants the Pope burnt at the stake. (Exit)

Williams: I thought that went very well, didn't you? In one sense we are all saying the same thing about religion, and sharing some very positive dialogue about whether God really exists. It reminds me of the General Synod.
Posted by Anonymous at 11:05