We have to thank Joseph Shaw for drawing our attention to the heroic words of Mgr Basil "Lofty" Loftus of the Catholic Times:

Like the Gestapo in the Channel Islands during the last war who had to admit that they couldn't make everyone speak German, but forced them to drive on the right-hand side of the road, that Congregation had, regretfully, to admit that it could no longer make everyone worship in Latin, but by means of an unintelligible translation it would force them to conform to an alien culture in order to demonstrate its own superiority. 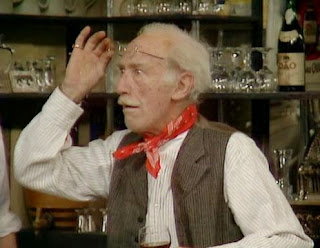 "It is I, le cleric!" Basil Loftus reveals himself to an amazed audience.

We are in the early 1960s. It is over 1500 years since the Romans left Britain, but still the hated Catholic Church attempts to force its people to worship in Latin. Luckily, as seen in the television series Salve, salve! there is a heroic resistance movement in which Lofty is a key player.

Hated and feared by all is a theological consultant by the name of Josef Ratzinger of the Gestapo, whose main aim is to suppress the use of "vernacular", a language spoken by everyone, and insist on Tridentine rites that nobody has ever been able to understand. 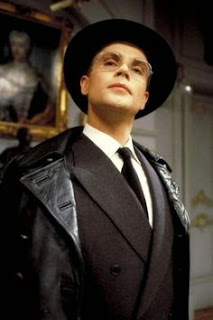 The hated Herr Ratzinger of the Gestapo.

Resistance to the Nazis is centred on the Vatican II café, where Lofty the pianist plays a selection of his favourite Catholic songs, including "It ain't necessarily so," and "Imagine there’s no Heaven." These are later expanded into hard-hitting heretical articles for the Catholic Times satire page.

Vernacular is a difficult language to master, and Lofty's own preferred translation of the Mass, which begins with "Good moaning!" is clearly defective in some respects. Moreover, his style is based less on "Listen very carefully I shall pray this only once" than "Don't bother listening to me now, I'll be saying the same again next week, or maybe something sillier." 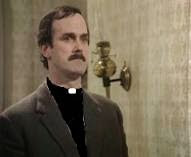 Unfortunately, Lofty gets crazier as time goes on, and it obliges his listeners to put cheese in their ears if they wish to maintain their sanity. The war against the hated forces of Latin continues, and victory is by no means assured.