Was he a tyrant or a devout Catholic?

This week saw a controversial Requiem Mass in Leicester, and the question on the lips of everyone who saw it was "Not a bad service, but was he a tyrant or a devout Catholic?" Certainly, the prevailing view among Catholics is that Vincent was a bullying dictator, who attempted to silence all opposition and brought shame on the Catholic Church with the wicked persecution of his enemies. But some people do hold other views. 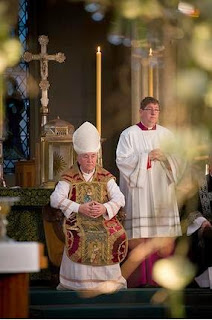 The somewhat eccentric Society of Vincent holds a contrary opinion, portraying its hero as a humble and kind man, who owned his own Bible, which he kept in pristine condition by the expedient of never reading it. They say that Vincent was a timid person, who wanted nothing more than to become pope, world dictator and manager of Liverpool football club. His first step was to fight for a total modernization of Catholic teaching on marriage to remove its old-fashioned "Christian" emphasis and bring it more in line with secular values. 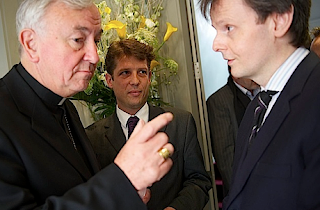 However, the judgement of history is predominantly against Vincent. There are claims that he launched a persecution of Catholic priests unparallelled since the era of Queen Elizabeth, forcing the more paranoid of them to install "priests' holes" in their presbyteries. in case his henchmen came knocking at the door. Although he was simply the ordinary of the Westminster Diocese, and not a primate except in the zoological sense, he did not hesitate to interfere with doings in other dioceses over which he had no formal authority.

Vincent himself liked nothing more than having his photo taken, or being interviewed on radio and television; thus, it was all the more shocking when he attempted to imprison 500 priests in the Tower because they had written a letter to the Catholic Herald. 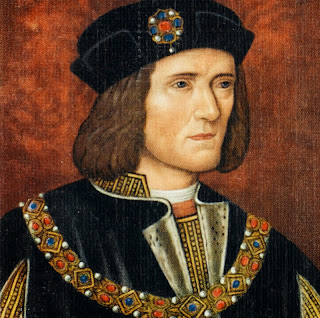 Richard III - humiliated after his death by Vincent.

Said Richard III, a retired king and practising Catholic: "After my death I rested peacefully in a Catholic car-park for 500 years, before being dug up and moved to a Protestant cathedral in Leicester. They mocked me by giving me a funeral according to the rites of my evil great-nephew Henry. The Catholics, who should have known better, sent Vincent to say a Requiem Mass for me; he didn't even realise that Masses should be in Latin, but insisted on saying it in Vernacular (a Liverpudlian dialect). How did such an ignorant man ever become a bishop?" 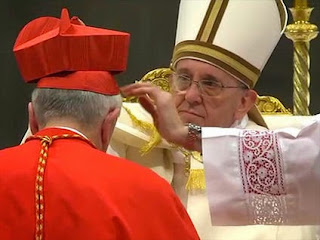 "It doesn't fit too well, but your head seems to have swollen."

Sadly, Vincent's rule in Westminster was a long history of oppression. Worried that they were revealing too much about his activities, he denounced bloggers as "gossips", saying that they should have no place in the Church. He saw himself as a new St Augustine of Hippo, fighting the Donatists, when he issued a Reflection Document for Clergy on Marriage and Family Life that brought terror into the hearts of the faithful. History does not (yet) record his ultimate fate: did he die in a battle with the faithful and end up buried in a Catholic car-park? Or did he achieve his ambition of becoming Pope Francis II?

Vin the Ordinary, described as a bitter red.