Following the sacking of Catholic chaplain Father Mark Morris by Glasgow Caledonian University for the crime of being too Catholic - in particular, holding a prayer service to seek "reparation for the gross offence to God which is Pride Glasgow" - GCU have finally found a replacement who sees no problem with Catholic priests parading in rainbow leotards if it helps to build bridges and promote equality and diversity, inclusivity, whips and leather accessories for all. 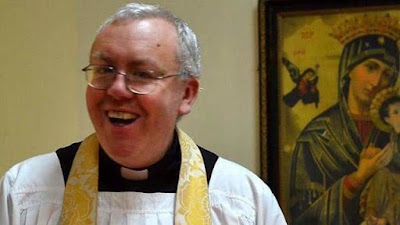 Fr Mark - note the offensive painting behind him.

Cardinal "Ted" McCarrick of the St Gallen Mafia had offered his services, but it was felt that this would be a step too far, even for GCU. Besides, it will take another ten years or so for Catholic doctrine to evolve to a point where sexual abuse can be publicly supported (although several of the Pope's closest advisers are said to be "encouraging").

No, GCU has gone for a more respected figure, Fr James Martin LGBTSJ FBPE (we are not sure what the last one is about, but we think the F stands for "fruitcake"). Not only will he refuse to quote the Catholic Catechism on homosexual relations (let alone Biblical teaching on the subject), but he is a man whose Pride knows no bounds. 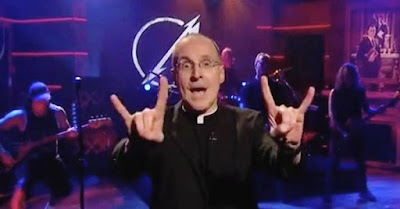 Getting down with the youth...

Finally, Archbishop Tartaglia, the 40th successor of St Mungo, has complained in the strongest possible terms to the principal of GCU about the treatment of Fr Mark, "a totally orthodox priest, persecuted for upholding Catholic teaching". Only joking, folks!

Note for non-UK readers, Glasgow Caledonian University isn't a distinguished seat of learning, similar to Oxford and Cambridge, nor even a research-led university such as Liverpool or Bristol. It is one of a large number of lesser establishments that now call themselves universities - in this case it started life as Angus McPride's Haggis Parlour.