How to preach a Royal Wedding sermon

Some day you may be invited to preach the sermon at a royal wedding, at which some lesser piece of royalty is joined in holy matrimony with a celebrity. There are not many unattached princes of marriageable age around at present, but who knows, Prince Andrew may have hit it off with Oprah Winfrey. So be prepared! 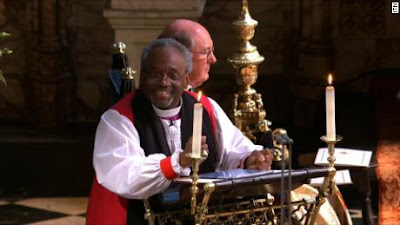 Don't be discouraged if someone looks the other way and turns off his hearing aid.

"Why me?" you ask. "Why can't Welby do it himself? All right, he's a great bore. But how about Nurse Sarah Mullally, the bishopess of London? Ten minutes of politically correct waffle, that will go straight to the heart, won't it?"

No. For whatever reason, the lot has fallen on you. An estimated 2 billion people will be listening in, so you must DUMB DOWN. No learned discourse on the spirituality of the lesser kings of Judah, or the precise translation of some particular word in the synoptic gospels. No, they want SEX

I'm sorry. They want LOVE. Statistically, it has been shown that nearly 30% of people who get married are actually in love. Now, no C.S.-Lewisite subtleties about "Four loves" - Storge, Philia, Agape, Eros. Just bundle them all together and dig out some quotations about Love.

Obviously Jesus talked a lot about Love, and you can mention this. But don't forget to bring in some more important theologians such as Martin Luther King, and - if you like - Groucho Marx and Tommy Cooper ("Heard the one about two aerials meeting on a roof, falling in love, and getting married? The ceremony was rubbish but the reception was brilliant.") 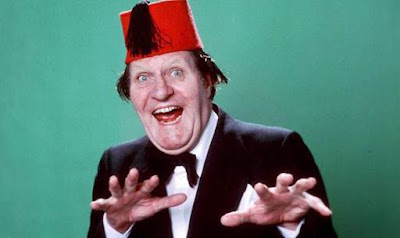 The ideal preacher, but sadly no longer with us.

Somewhere about now you can throw in some Biblical reference. Maybe to Balm in Gilead (also taken up by Edgar Allan Poe in "The Raven"?). Of course this will be over the heads of the non-religious. 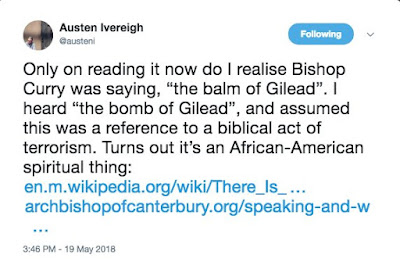 If you have any say in the wedding hymns, you can get them to sing that old Gospel Song "Stan Balmy", which seems to consist of this magic phrase repeated 946 times. This is what we call liturgical coherence.

Oh, slip in a reference to Teilhard de Chardin, even if you do call him "Tired Day Chardan". This will go down well with your celebrity audience, who will mostly think he's a fashion-designer.

Anyway, finish off now. Get back to LOVE, and hope that the happy couple haven't already got tired of each other. Money can't buy me love. Love is a many-splendoured thing. Thirty-love (one for Serena Williams there).... There is power in LOVE, which is why it is like FIRE. 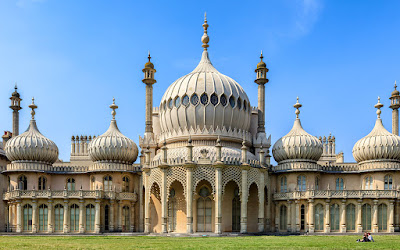 A new palace for the Duke of Sus-sus-sus-sex.