How to kiss the Pope's ring

Many distressed Catholics have written to me along the following lines:

I had an audience with the Pope last week, and I attempted to kiss his ring, to show my loyalty to the Magisterium, to the Church, and to the Seat of St Peter. However, Pope Francis snatched his hand away, muttering something like "He's not going to touch my Precioussss!" and forced me to kiss his other hand instead. What can I do? 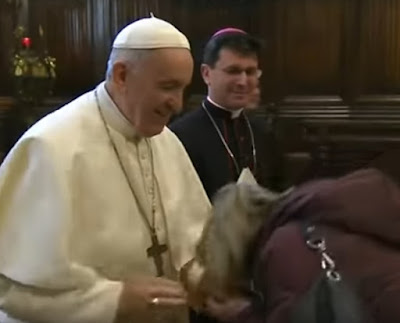 Well, the most charitable explanation is that the Pope is saying "Kissing the Pope's ring is an important ritual, but I don't want to make it too easy." Any claims that he really thinks "It's all about me!" would be most unfair (which is why we mention them).

We therefore recommend that you grab the Pope's right hand in yours, and drag it to your lips. (Perhaps saying "Pleased to meet you. Have you come far?" will distract him enough to make this possible.)

Remember, however, that Francis used to be a bouncer, and may attempt to throw you over his shoulder. Please do NOT take this as a challenge and throw the Pope over your own shoulder. Leaving the Pope sprawling on the ground is probably an excommunicable offence. Anyway, it's definitely the sort of thing that self-absorbed Promethean neo-Pelagians would do.

Another possible explanation is that Rome is full of pickpockets and other shifty characters, and the Pope is scared that the ring might be wrenched off his hand when he isn't looking. In that case the lucky thief might set himself up as Pope - and although he (or she) would probably do a better job, that is just not the accepted away of transferring papal power. Get yourself elected by a conclave, like the rest of us have to! 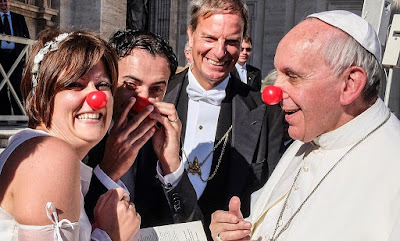