In the past we have had one or two doubts ("Dubia") about Pope Francis, but yesterday he said something that only a truly saved person could have said.

Reading between the lines, we all know what Francis was referring to, don't we? The wicked excomunication of poor Eccles from Twitter has finally come to the notice of Pope Francis as the worst miscarriage of justice since Peter Hitchens persuaded Queen Elizabeth I to slaughter a bunch of English martyrs, claiming that they had committed treason.

From now on, we're backing Francis 100%. Get lost, Burke! Shut up, Sarah! Play it again, Stephen Walford! Little Austen Ivereigh is my new best friend! In fact, going further back, all the previous popes were wrong and Francis is right! 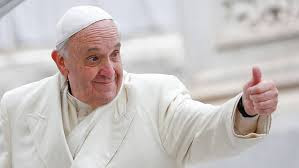 A thumbs up from the big man!

There's still no explanation why Twitter suspended its most saved user (apart from Francis, of course), but now that the Vatican is parking its tanks on Jack's lawn, the end is surely in sight.