Following the conviction of Cardinal Pell on the basis of totally unbelievable testimony, the Victorian Kangaroo Court of Appeal has confirmed the verdict by a majority of 2 to 1; that is, Anne Ferguson and Chris Maxwell believed him guilty "beyond all reasonable doubt", while Mark Weinberg disagreed, writing a mere 200 pages expressing one or two reasonable doubts. 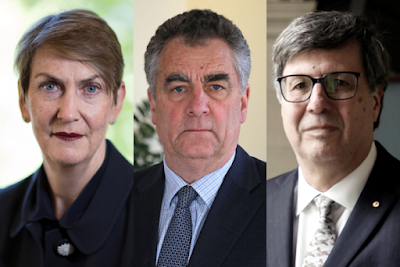 Spot the man with the functioning brain (R)

The arguments of Ferguson and Maxwell, if accepted, actually imply that Cardinal Pell was guilty of practising witchcraft, or possibly miracles (useful when his cause for canonization comes up).

* Your Eminence, you are accused of bilocation, in that your corporal body was standing outside the cathedral talking to dozens of people, at the same time as it was in the sacristy.

* Cardinal Pell, you are accused of bewitching your vestments, so that you could expose yourself under several layers of heavy clothing, while at the same time attacking your victim.

* Pell, you must have been aided by demons, as the above could only have been managed by someone with four hands.

* Pell, you rotter, you cast a forgetfulness spell, so that the victim did not remember anything of the event until 20 years later, and could not even remember when the events happened, and thereby made it impossible for you to call witnesses to prove that nothing happened. 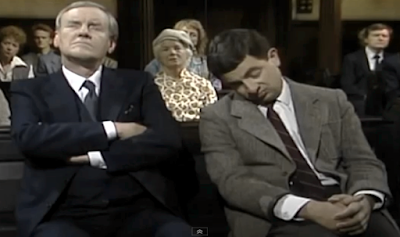 A key witness against Cardinal Pell. Oh, sorry, there weren't any.

* Pell, you complete and utter swine, your real offence is that you are a Catholic, and speak out against same-sex marriage and abortion, which are the pillars of Australian society.

* Pell, you will be damned eternally, because you noticed that the Vatican Bank had been up to some extremely dodgy transactions. Don't expect Pope Francis to help you, therefore!

With all this in mind, we indict Pell on charges of witchcraft, and sentence him to be burnt at the stake.

And this is the reasoned verdict of us, Mad Annie and Bonkers Chris. WEINBERG, WILL YOU SHUT UP?

Phew, Annie, I think we got away with it. Fancy a few tinnies to celebrate?