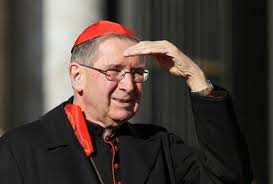 Our honoured guest - a man of vision.

Eccles: So, your Eminence, you managed to get to the conclave after all, eh? Would that make you the only Cardinal present who has been officially forbidden from exercising episcopal functions?

Baloney: Yes, I contacted the Guinness Book of Records hoping for the most unsuitable papal elector award, but apparently there was a medieval Cardinal Mandelson of Basingstoke who was even nastier. At least nobody has yet accused me of cannibalism!

E: What do you think history will remember you for? Apart from the brilliant way you covered up the scandals in your diocese?

B: Probably my contribution to our heritage of beautiful cathedrals, Eccles. 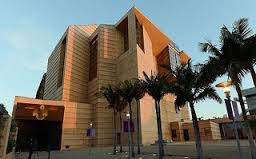 E: Quite so. A totally unattractive waste of money. And the cathedral isn't much better. Now tell us about your reactions to the election of Pope Francis.

B: For me, the most encouraging sign was his humility. He has rejected the papal red shoes, you know.

E: Wasn't that because they couldn't find any to fit him at short notice? Apparently, Pope Francis has the largest feet of any pope since St Telesphorus in the 2nd century A.D. 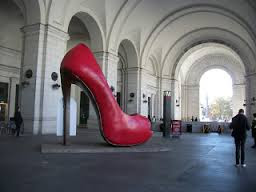 Owing to a confusion between centimetres and metres, the Pope was supplied with red shoes of the wrong size.

B: No, no, Eccles. Rejecting red shoes is a sign of humility, I pray that he keeps the black ones as a sign for us all.

B: O Lord, bless Thy servant Francis (whom Thou wilt have seen on television this week unless Thou wast watching Cormac Relief instead), and grant that his shoes may never turn red. Amen.

E: Apparently he rejected the traditional Mozzarella as well. Now, do you see any other changes, your Eminence?

B: Well, I personally hope that Pope Francis will take a tough line on sexually-offending priests. I mean, we can't just move them to other parishes, as some now-disgraced bishops did in the 1980s. Well we can, but we can't get away with it so easily.

E: Quite so. Anything else?

B: Some wicked people have been criticising me, you know. It really must stop. I am a man incapable of sin: when I go to Confession and the priest asks me what I've done, I say "Nothing!" Think of me as being on the side of the angels. 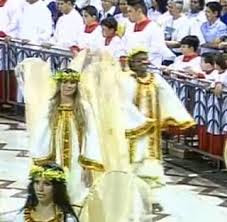