How to be a popular Pope

In the spring of last year I received an urgent telephone call from Rome: "Eccles, I have just been elected Pope. I've done the 'Oh my goodness I never expected this' routine and the 'I'd like to thank my parents, my teachers, my auntie Carmen, my pet donkey Diego, and all the cardinals who voted for me' speech, and even the 'I love you all' bit. So what can I do now to become the most popular pope in history?" 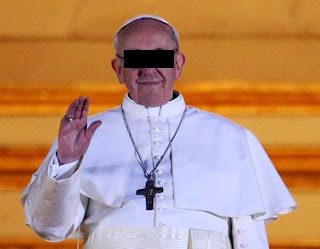 It would be wrong of me to say who consulted me.

My client comes from South America, where the forms of worship are rather different from those in Europe and North America, for example. There it is considered de rigueur to give the Mass the air of a wild party - so Pinocchio puppets, tango dancing, dodgy footballers, angels on roller skates, etc. are all considered a necessary part of the liturgy, in a way that is rarely seen, for example, at the Brompton Oratory. Despite being Latin American, my anonymous friend is not a fan of Latin, and he would be quite happy to make Italian the universal language of the Catholic Church.

"Well, George," I told him (I call him George because I have known him since he was a humble cardinal). "The main problem popes have is that they are Catholic. As a result they get bad publicity in the liberal press. SEXIST SKY-FAIRY BELIEVER IN SILLY DRESS REFUSES TO ALLOW GAY PRIDE MARCH IN VATICAN - as the Tablet put it. You must become a liberal yourself."

"Did the Tablet really say that?" asked George.

"Yes, it was in Prof. Eamon Duffy's learned commentary on the Acts of the Apostles. Harsh words about St Peter, there." 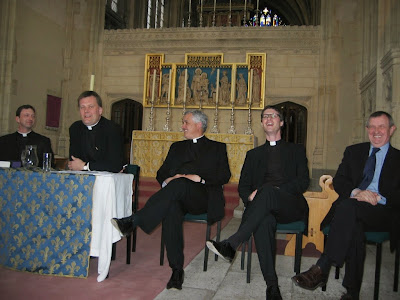 Chilling out with Eamon Duffy (R).

"Now, what people don't like about popes is that they think they have a fairly comfortable lifestyle," I continued. "What can you do to counter that?"

"Comfortable?" asked George in amazement. "I have to go to two-hour masses in the middle of the night, I have to meet all sort of crazy people from lands where the Catholic Church is in disarray - have you met my stalker - he's a chap called Cormac - by the way? - and then I have to travel around the world and kiss airport runways when I land. Ugh."

"Still, you could dress more humbly than Benedict did. No papal fanon or red shoes - give them to the poor. Get down with the 'yoof' by wearing a papal baseball cap, tee-shirt, jeans and trainers. It works for the Anglicans." 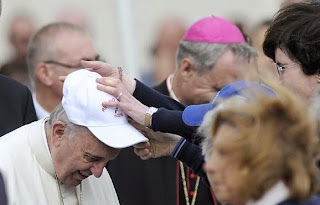 Getting down with the yoof.

"Now, how about rewriting Christian teaching?" I suggested.

"I can't do that - I'm the pope!" said George. "It may be all right for German cardinals - they're basically Protestant anyway - but if I start taking a soft line on divorce, abortion, or homosexual acts, then I'll be eaten alive! Mundabor and Rorate Caeli will call me an anti-pope. Father Z will be perplexed. Father Hunwicke will say something learned and incomprehensible, but all his readers will know he's calling me a heretic. Even Damian Thompson will start criticising my hairstyle."

"Tricky, isn't it?" I agreed. "How about making a few off-the-record throwaway remarks that are obviously foolish, but which can be taken up as liberal soundbites? Ask 'Who am I to judge?' when some ghastly sin is mentioned. Have a go at self-absorbed Promethean neo-pelagianism - nobody knows what it is, but it sounds as if you are getting tough on traddies. For that matter, why not persecute some very devout but rather traditional order of friars? Tell them that unless they bring in clown masses toot sweet they will be closed down!" 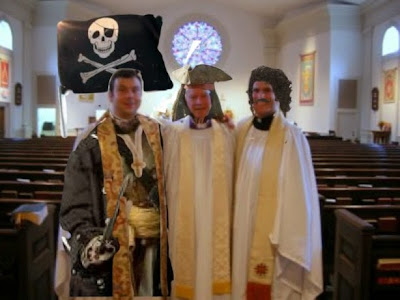 Yo-ho-holy! A new look for the Franciscan Friars of the Immaculate.

"I know - I could hold a synod!" said George delightedly. "I'll spin it that we are rewriting the New Testament so that the more embarrassing parts of Christ's teaching can be quietly dropped. Then if one of those awkward customers like Burke and Pell starts complaining, I can deny it all and blame it on 'loopy' Kasper. By the way, I'm going to have to do something about Burke: he keeps accosting me in the Vatican tea-rooms and sneering 'Are you really the Pope? Oh good grief!' Now I can sack him!"

"Good thinking, Holy Mate," I said (I call him Holy Mate because we used to go drinking together). "Don't worry about offending orthodox Catholics - they would have preferred Benedict anyway, and besides they'll go to Mass whoever the pope is. Dumb down, take the Christ out of Christianity, add an N, and what have you got?"

George contemplated my brilliant wordplay for a moment, before replying "Inanity. Yes, what the world is looking for is a Pope of Inanity!"