The case against Cardinal Pell

We are delighted to include an exclusive interview with Billy Bong, one of the jury who recently convicted Cardinal Pell of sex offences.

Eccles: Now, Billy, how did you get to be on the jury? 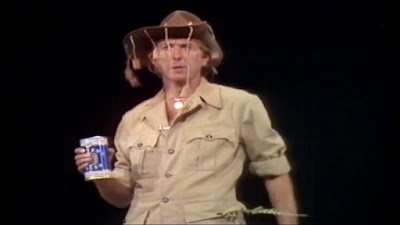 Billy: Well, I answered an advert, which said "Jury members wanted for high-profile trial. The successful candidates will have an IQ of 80 or less, be virulently anti-Catholic (if possible, freemasons), and to have had their consciences surgically removed." Unfortunately, I had already missed out on an earlier advert.

Eccles: What was the earlier advert?

Eccles: I see. Now, the original trial resulted in a hung verdict, 10-2 in favour of Pell. Why did things swing round so far for the second trial?

Billy: Well, we knew he must have done something, even if we weren't sure of the details. Think how many comedians use "Catholic = child abuse" as a very very funny joke, even better than the old racial jokes about aboriginals and sheep that we used to love. So what could we do but find him guilty? 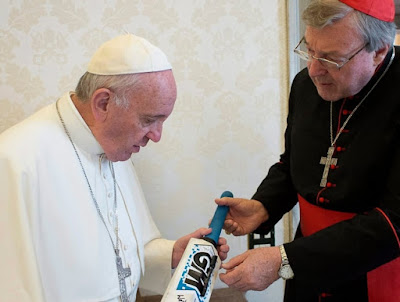 A sign of bad character: Cardinal Pell argues with the umpire.

Eccles; What about the evidence that he was actually outside the cathedral chatting to the congregation at the time he was supposed to be in the sacristy?

Billy: Look, Catholics believe in miracles, don't they? So it must have been possible.

Eccles: And exposing himself while wearing alb, stole, chasuble, etc. over his trousers?

Billy: This was the prosecution's point entirely. Under his clothes he was completely naked!

Eccles: And the witness not being cross-examined?

Billy: They didn't want to upset him by pointing out that he was either a liar or a lunatic. (They'd had so much trouble with other witness, a junkie who kept changing his mind.) Inspector Plod of the anti-Catholic Task Force ("Flying Plod of the Yard") went to great trouble to write his testimony in green ink, and he didn't want to rewrite it.

Eccles: How about "Thou shalt not bear false witness"?

Billy: Oh yes, oh yes. They warned us that the Catholics would try to confuse things by digging up out-of-date theological arguments. 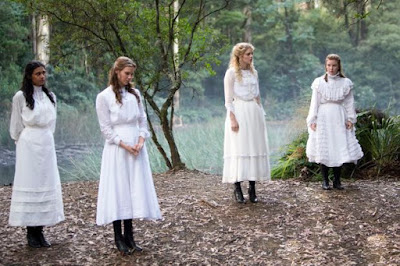 Picnic at Hanging Rock. Police claim that Cardinal Pell abducted these girls in 1900.