A new documentary about the late disc jockey and television personality, Sir Jimmy Savile, makes the shocking claim that Sir Jimmy engaged in activities that the BBC would normally condemn in the strongest possible terms. Yes, he was a Catholic. 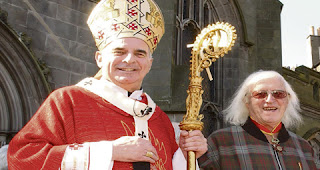 An incriminating picture of Sir Jimmy and "Keith."

Said a BBC spokesman, "We at the BBC knew nothing of his secret life as a Catholic. We naturally assumed that he was atheist in good standing, otherwise we would never have employed him. But it seems that he got up to some very questionable activities in his spare time." 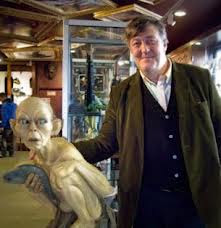 Details are only now emerging of the sordid lifestyle enjoyed by Sir Jimmy. On a Sunday he would sneak into a sinister building known as a "church," where a man dressed in absurd clothes would conduct a ritual known to the initiated as a "Mass." Sir Jimmy would sometimes take part in carnal pursuits such as the "kiss of peace," and would sing songs with politically incorrect lyrics about some character called "God." 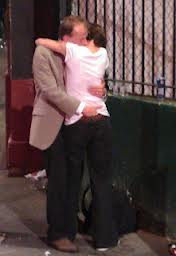 Sometimes, it is alleged, Sir Jimmy attended a ceremony called "Confession," where he tried to shock another Catholic by relating disgusting stories about his life, in which he had attempted to "Fix it" for many innocent victims.

Rumours that Sir Jimmy was a Catholic began to circulate at the time of his funeral. Said one commentator, "When I saw his coffin being taken into Leeds Cathedral, to be received by a man wearing a funny hat, I knew that something was up." 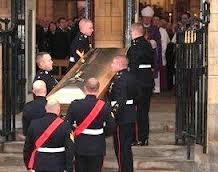 Sir Jimmy's coffin, being received by a man in a funny hat.

As a result of our investigations, we can confirm that the "man in the funny hat" was none other than "Bishop" Arthur Roche, now believed to be in hiding in Rome. Already, there are calls for Sir Jimmy to be posthumously stripped of his knighthood on account of his Catholic habits. There are many precedents for this, mostly dating from the 16th century.