It turns out that rumours that the Catholic Church had become extinct - like the Anglican Church - were slightly exaggerated: a rare member of the species Homo Catholicus has been sighted in Poland. Jakub Baryła, a 15-year old boy, was observed in Plock, holding up a crucifix and making characteristic cries of Salve Regina in the face of the local Gay Pride Bore-athon. 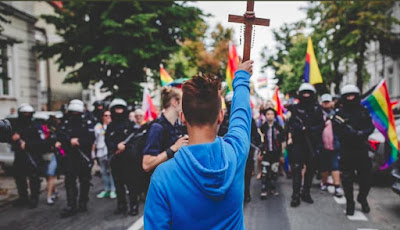 A rare sighting of a Catholic.

Said David Attenborough, the veteran expert on endangered species, "Unfortunately, no Catholic priests or bishops have been sighted (unless they were taking part in the march); moreover, we need a breeding pair of Catholics if the species is to continue. Still, there is some hope that further sightings of Catholics will be possible, if climate change has not wiped them all out." 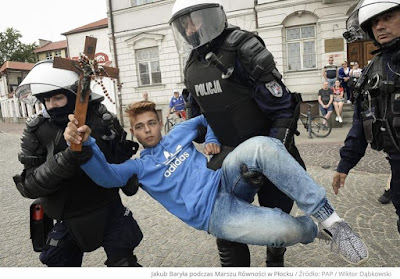 Police take the Catholic to a sanctuary.

Attempts to find Catholics elsewhere have so far proved inconclusive. For example, scientists are divided over which of the Pontifex Bergoglionis and the Burkeus Raymondus is truly a subspecies of Homo Catholicus (their calls are totally different). Most people agree that the Blaseus Cupichus cannot be regarded as any form of Catholic. 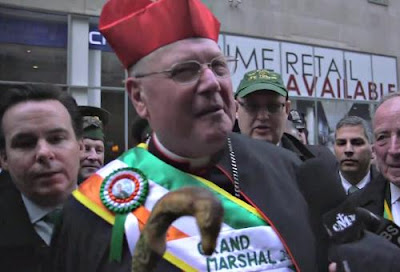 Dolanus Crassissimus, sighted at a "gay" parade, but clearly not a Catholic.