A new film "The Two Popes" about Pope Benedict XVI and Jorge Bergoglio (as he was then), is soon to be released. As it will soon be available on the notoriously Catholic-friendly channel Netflix, we know that it will be completely true to the facts, and sympathetic to these two holy gentlemen. 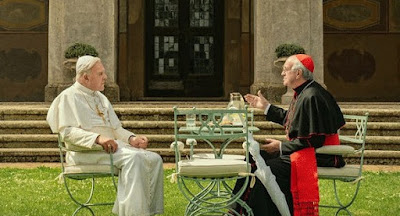 The plot (loosely based on Austen Ivereigh's pot-boiler Pope Francis, the Great Redeemer) begins with Cardinal Bergoglio paying a humble visit to Pope Benedict in order to reassure him that, when he (PB) decides to retire, he (CB) will be ready to step in and correct all the mistakes that he (PB) has made, as well as the mistakes of all the other popes (P, L, ..., J23, P6, JP1, JP2) who came before him. 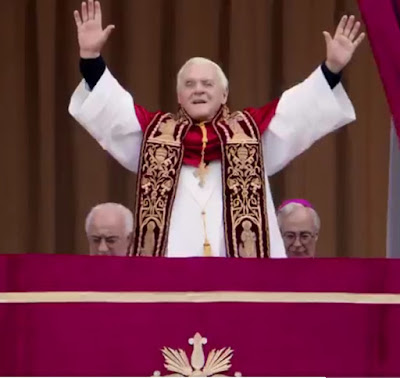 Benedict offers Bergoglio some liver cooked with fava beans, and a nice glass of chianti, but the cardinal humbly declines the offer and explains his plans to use an encoder obtained by his henchman, cyberterrorist Henry Gupta, to provoke war between China and the UK.

I'm sorry, Austen, we're deleting that bit. You seem to have got the plot confused with The Silence of the Lambs and Tomorrow never dies.

Anyway, more details will be available later, but it seems that the main theological discussion concerns the Beatles, and Bergoglio asks the Pope whether he knows their famous song Emma Bonino. He doesn't.

Other hard-hitting plot lines involve a criticism of Bergoglio's shoes (made from the finest Argentine Amoorish Leatheria), and a general realization from all the characters involved that Pope Benedict is BAD and Jorge Bergoglio is GOOD. 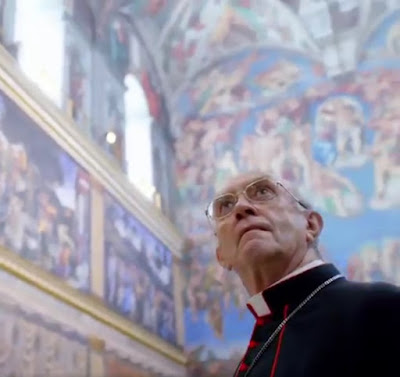 A humble modern cardinal, who would never dream of being Pope.