Followers of Fr James Martin LGBTSJ have long admired his interpretations of the Bible ("Mary Magdalene was the Church", "Jesus learned from the Canaanite woman", "The Holy Spirit is female") and now at last his thoughts have been collected into a book, "BUILDING A FUDGE". We are pleased to be able to print some extracts here. 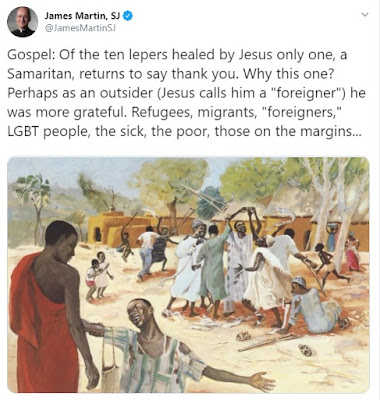 In fact the remaining 9 were off to an LGBT "retreat".

Let's look at the story of Noah's Ark in detail. God had decided to drown most of the human race, as they were guilty of homophobia, insensitivity of the needs of migrants, and a refusal to take part in the Ignatian Yoga sessions organized by Fr Noah SJ.

The interesting part of this story begins when the waters were receding, and Noah decided to send out a dove from the ark. We can see this dove as a refugee seeking a new life, and the first time it went out it came back, rejected, possibly because it was an LGBT dove. The next time, the dove returned with an olive leaf, showing that the olive tree community were trying to build bridges with it. Finally the dove did not return. And we all know what happened next: God set a rainbow in the sky to symbolise the fact that He approves of LGBT sex. 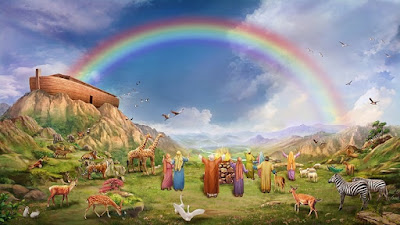 The LGBT message could hardly be clearer!

Let's move on a bit to the story of Shadrach, Meshach and Abednego in the Book of Daniel. Why were they thrown into the burning fiery furnace? Was it because they refused to serve the gods of Nebuchadnezzar and worship the golden image he set up? This doesn't sound very likely, does it? Would Pope Francis SJ throw Mr Alexander Tschugguel into a burning fiery furnace, just because he was disrespectful to the idol of Pachamama? Well, actually, he probably would, the Holy Father has quite a temper (trust me, I am a great friend of his). Still, in this case there was obviously more behind the story.

Jesuit scholars reckon that Shadrach, Meshach and Abednego were probably leaders of the local LGBT community. The fact that God "built a bridge" towards them by sparing them from the intense fires simply proves my case. They were the marginalised, the despised, the rejected, but in the end they triumphed. 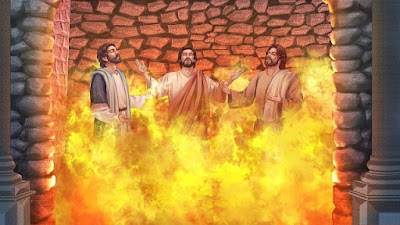 "When we come out we can sell our story to the National Catholic Reporter!"

Finally, a story from Maccabees. There were seven brothers, and they were threatened with tortures if they did not renounce their faith and eat pigs' flesh, which was against their traditional teaching. Quite a tough assignment, similar to the persecution I received when I was heckled in Baltimore! Still, the story has a happy ending, as they all agreed "These are my principles, but if you don't like them I have others" and tucked into bacon sandwiches.

Of course the Bible has an account that says that all seven were put to death in hideous agony (skin torn off, fried in a pan etc.) but this is almost certainly a translation error. When reading the Bible, always ignore the inconvenient bits. That's what I do! 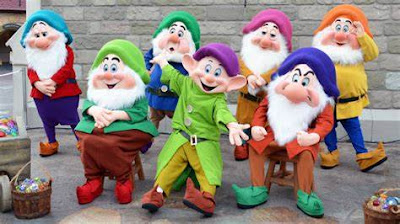 "It was all a misunderstanding!" The seven brothers celebrate.