The Holy Father has had several recent diplomatic triumphs, visiting places where Catholics are persecuted: Iraq went very well, although Francis is still trying to get the taste of sheep's eyes out of his mouth; moreover, he ALMOST managed to spare 10 minutes to see Cardinal Zen, the representative of persecuted Catholics in China. Now a request has come for an urgent visit to St Peter's Basilica, where a persecution of Catholics unparalleled since the days of Nero has begun. 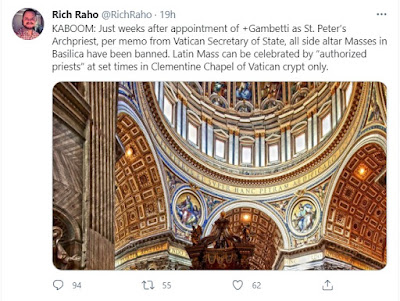 A devout Catholic becomes hysterical when he hears the tragic news. From now on visiting parties of pilgrims wishing to celebrate Mass are invited to do so in one of the following locations: 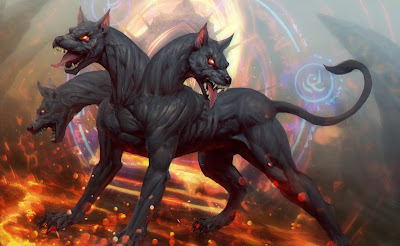 Fido guards the entrance to the place reserved for Masses. All Masses must be in Italian, and involve an idol of Pachamama, or they will be stopped. Anyone trying to offer a traditional Latin Mass will be escorted to the River Tiber and pushed in. The good news is that several slots are available: 3.23 a.m., 3.33 a.m., and 3.43 a.m. Each slot lasts ten minutes, so do practise speaking quickly, Fathers. On being told of these new regulations, Pope Francis laughed heartily for 20 minutes and then hastily composed himself and said "We must visit these poor oppressed pilgrims. Make sure they cough up 20 euros each, as the Vatican is rather broke at the moment, with the Roma Power Company threatening to cut off our electricity any time now. We do have our own dynamo, but little Ivereigh can't keep running round in his wheel all night." 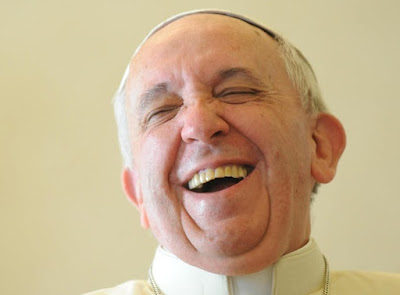 Pope Francis expresses his deep distress at the persecution. A papal visit to St Peter's is not considered to be one of the more difficult tasks, involving just a ten-minute walk from the humble study in which the Pope works on developing his new doctrines. However, it has few photo-opportunities, and no racing around in a popemobile, let alone a chance for EX AEROPLANA announcements. Still, such a trip would be a very welcome boost to morale, and the pilgrims are grateful that a provisional date of March 13th 2043, the 30th anniversary of Francis's accession, has been agreed.
Posted by Eccles at 13:03