Death of a god

Today we have an exclusive interview with Archbishop Charles Anne Andrew Edward, the head of the Prince Philip religion in the New Hebrides, also known as Vanuatu. As is well-known, Prince Philip was regarded as a god over there, and his demise was a good excuse for us to talk to the archbishop. 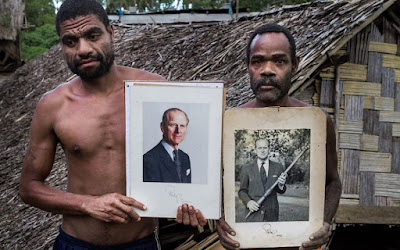 A sad day for the Philippians. Archbishop: What are you doing here? Eccles: You invited me. Archbishop: Well, you didn't have to come! (As the divine Philip put it.) Eccles: Your grace, could you tell us something about your worship of Prince Philip? Archbishop: Yes, we use a liturgy based on the wise sayings of our god. For example, we would start a service with words something like this: Eccles: So what will you do now that your god is dead? Archbishop: We are moving from a Vetus Ordo worship of Prince Philip to a Novus Ordo worship of Prince Charles. My man Annibale Bugsbunni is looking for the new god's memorable sayings, but all he has come up with so far is "To get the best results you must talk to your vegetables" and some stuff about carbon dioxide, organic muesli, and monstrous carbuncles. Annibale has a difficult task on his hands. Eccles: Well, good luck with that. Archbishop, thank you very much.
Posted by Eccles at 12:01