Tributes to a great figure in theology

Thanks for the idea to an anonymous reader. The Pontifical Academy for Life has just lamented a great loss to Catholicism in the following words: Disappears a great figure in the theology of the century, whose ideas and analyzes must always make us reflect on the Catholic Church, the Churches, the society, the culture. #halking Yes, the bells were tolling in the Vatican ("Küng-Küng-Küng") to mark the death of Hal King (alias Henry VIII), one of the few people to be awarded the title of "Defender of the Faith". Hal was known for his strong defence of the institution of marriage - he was so keen on it that he participated six times - as well as his pioneering work in modern surgery (removing the heads of people who no longer needed them) and his sterling work for the monasteries, which he took into public ownership as part of his charitable work. Curiously, some people regarded Hal King as a heretic, and he was even forbidden to teach Catholic theology. It is hard to see why. 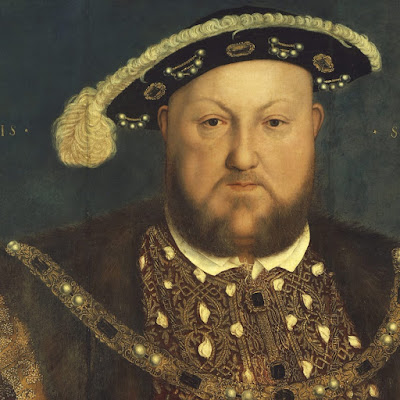 Defender of the Faith. Father James Martin SJ concurs with the PAL in his assessment of the great man's life: Breaking: German envoys are reporting that Hal King, a towering Catholic theologian and frequent critic of the church, has died at 55. May he rest in peace. By overwhelming popular demand, a statue of King Hal will be erected in St Peter's Square, and luckily one was already available (he kept it in the gardens of Hampton Court and regularly went out to admire it).

The Statue of King Hal. As the whole world mourns, we recall the time that the Pontifical Academy for Life paid tribute to the late Mr Genghis Khan, describing him as an "austere religious scholar". Surely, Hal King is also worthy of this heart-felt tribute?
Posted by Eccles at 10:31