Scene 1: Balham Police Station. Inspector Thugg is directing his officers. Thugg: Well done, team. You really put those Polish Catholics in their place. Holding a service of religion on Good Friday! If they wanted to meet, why couldn't they have just torn down a few statues or looted some shops, like normal people? Then we'd have left them alone. 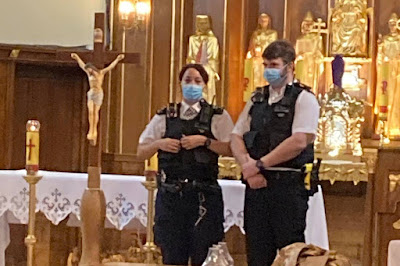 Bad vestments. Sergeant Bludgeon: What next, Guv? (Editor's note: all sergeants call their bosses "Guv" as a result of watching too many television serials.) Thugg: Go out into the world and spread the Good News, Bludgeon! Go and find another church to trash. Constable Bonehead: We passed something called Grand Mosque on the way back. Will that do? Thugg: I guess so. Didn't Pope Francis say that Muslims were just like Christians, only richer? You won't meet any trouble. Off you go! Bonehead: Any chance of some food before we go? Thugg: Pick up a bacon sandwich from the canteen. You can eat it when you get to the mosque. 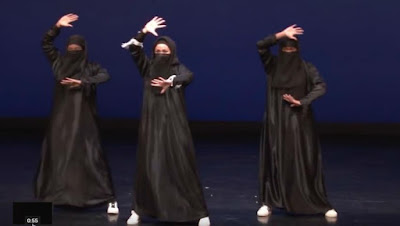 Liturgical dancing. Scene 2: At the Mosque. Inside, Imam Hamza is explaining some juicy bits of the Koran. Bonehead: Oi, Sarge, there's a pile of shoes here. Should we take off our size 14s as well? Bludgeon: No, Doris, we'll need them if there's any trouble. Remember, go for the vicar first. Imam Hamza: And now, my brothers, let us offer each other the sign of war. Bludgeon: ALLAH, ALLAH, ALLAH! WOT'S ALL THIS THEN? Hamza: Infidel! Heretic! Bonehead: Fancy some of my bacon sandwich, Vicar? Bludgeon: Not now, Constable. Imam Mohammed Ali Floatslikeabutterfly Hamza, alias Fred Nargs, you are charged that on the evening of April 2nd, alias Good Friday, you did do something or other and we'll decide what it was when we get back to the station. Hamza: Boys, you know what to do! Two altar-servers with scimitars drive the police out into the street. Hamza: Thank you, lads. And now our next hymn, Shine, Mohammed, Shine!
Posted by Eccles at 12:38