The Da Mian Cod, and others

Renowned blood-crazed 50-something Telegraph blog supremo Damian Thompson was standing energetically in Berlin's famous Louvre Museum, at the heart of Piccadilly Square, admiring Michael Angelus's 1504 marble sculpture "David," which portrays the Arabian King David on the point of biting into a cupcake.

David. Note the cupcake in his left hand.

"Cupcakes," thought Damian pensively, meditating in a contemplative fashion on the highly addictive edible foodstuff, whereupon which he had written so movingly in his book on addiction, The Fix, which he himself had written. And this reminded him, it was the day on which the aforementioned memoir on addiction was to be published in paperback (his contacts at the heart of the publishing world had told him that this would be something like a hardback, only with softer covers).

Damian had not blogged on addiction recently. His protège (a Latin word meaning "dogsbody"), slightly-renowned 30-something leftie atheist blogger Tom Chivers, had been promoted from his key job of assistant deputy strategic events supremo, a position in which he had been mainly responsible for making the tea, and was now allowed to write the occasional Telegraph column in the Saturday "moron" slot. This in turn freed up more chronological time for Damian, in which he could blog about religious matters from a Catholic - and sometimes papist - viewpoint.

Or - and here Damian crossed himself religiously, making a cross symbol familiar to all Christians since Pope Pius XII - there was another possibility. He could use his blog to plug his terrible book again!

I had a great day today with a Texas military firing squad. 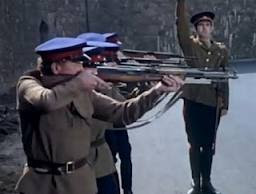 I was delighted when the Texas militia contacted me, saying that an army chaplain had been court-martialled and found guilty of three capital offences, namely, (i) being a liberal; (ii) reading the National Catholic Reporter (aka Fishwrap); and (iii) arguing with me on my blog. The penalty for these was execution by firing squad, and as a priest in good standing who understands the importance of a well-armed priesthood, I was delighted to assist. (Aim at the black cassock, and stain it red, as I always say.)

I had of course been practising my sharp-shooting beforehand, so as not to let the side down by missing the target: the colonel complimented us on the unerring way in which we exercised our liturgical duty, blasting the renegade priest to smithereens. 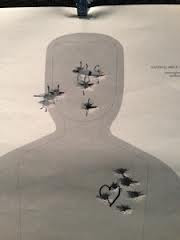 Don't mess with Fr X, unless you want to end up like this.

A new video has been released by the campaign for the ordination of dogs, called Ordain a Lassie. We do not have space to discuss this in detail, but the campaign is based on the observation that in some churches dogs are already being allowed to act as altar-servers. 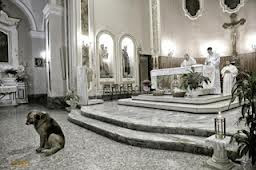