I wasn't expecting the Spanish Inquisition

The scene - the Pope's office in the Vatican. Pope Francis is sitting reading the names in his little black book and licking his lips. Spadaro is sitting in a corner of the room, eating peanuts, scratching himself and cackling over the new Stephen Walford humour column in the Vatican Insider.

F: It's going well. Burke is now an unperson, Pell has been framed, we're sacking Müller today. Next on the list is Sarah - I wonder what we can do about him? 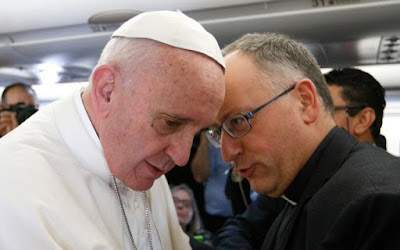 There is a knock on the door, and Spadaro goes to welcome Cardinal Müller to his morning audience. Müller enters, kisses the Pope's ring, aims a kick at Spadaro, etc.

F: Welcome, my son. What is ailing you?

M: Holy Father, I think we must finally do something about Fr James Martin. The man's heresies are so absurd that even the Lutherans say "I wouldn't go that far!" Also, he is bringing the Church into disrepute by celebrating "gay" Masses dressed in a rainbow loincloth. 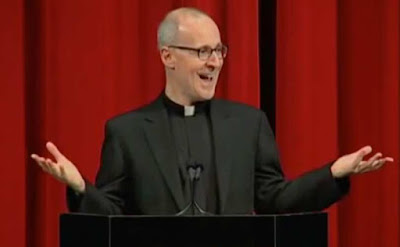 The Pride of the Vatican.

F: I have news for you my son. Guess who runs the Inquisition?

M: The Congregation for the Doctrine of the Faith? I do, surely?

F: No, you're fired. I'm appointing your Deputy, Luis Ladaria. So from now on, we've got a Spanish Inquisition.

Archbishop Ladaria bursts in, with two other cardinals, and they recite lines from the well-known Monty Python sketch. 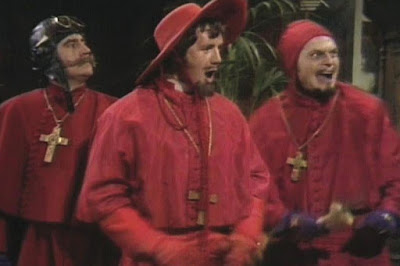 L: Nobody expects the Spanish Inquisition! Our two main weapons are fear and surprise. Surprise and fear. And discernment. Three main weapons.

F: All right, all right, you can finish this later. Don't forget the bit about "An almost fanatical dedication to the new Magisterium of Amoris Laetitia".

L: I have to go, Holy Father: we are planning a midnight raid on a bunch of Catholic priest-bloggers who insist on pre-2013 teaching. Finigan, Blake, Zuhlsdorf, ... all the usual suspects. (Exit.)

F (mutters): "Discernment" is good. Little Austen Ivereigh says that only Jesuits can do discernment. The fact is, it just means "make it up as you go along". Mind you, only Jesuits know that.

Oh, by the way, Müller, you've lost your other jobs too - Pontifical Biblical Commission, Ecclesia Dei, International Theological Commission. Now get out! 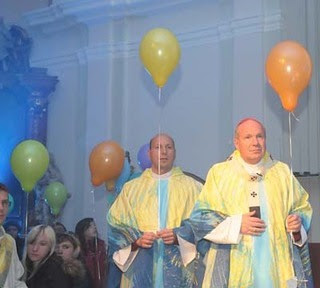 At least it wasn't Schönborn. Balloons all round!