Dat rarver clever tittle is a tribbute to our dear freind Damain Thopmson, who is puttin us up in his humble aboad now dat we has arrived in London. 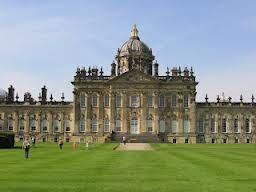 Dis is a pitcher of Castle Thopmson, which is a large huose in Notting Hell, where Damain lives wiv just a few servants to look after him.

Our flight from Austriala was a bit probblematical. Half way, de pilate said dat dere was a horrible noise commin from de engines of de Beoing 747, and so he told us, "Don't panic folks, we is gonna make an emurgency landin in Dubbai. But if you knows any good prayers, den let's be havvin dem if you wants to be saved." Well of course, I is saved alreddy, but I did sing a few Calumny Chappel songs, like "Come, Thou holy Parachute." But when we landed it turned out dat Anti Moly had fallen asleep in de tiolet, and it was her snorrin dat was causin de niose and vibbratoin. 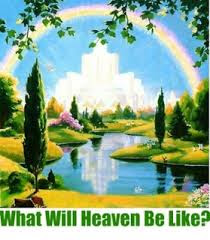 We got to Heathroar eventaully, and made our way to Notting Hell, which is a posh part of London. We was admitted into Castle Thopmson by de butler, who is called Will Heaven, it seems dat his parents was very infleunced by de poster above.

Anti Moly was a bit jet-logged wiv gin, so Heaven showed us to our rooms. I has got de Paddy Pio suite, and my dear anti has de Nanny Ogg suite, I aint heard of dat saint before, but she does seem to resemble my dere Anti a little. Dem Cathlics like kissin saints, but I fink even Damain would draw de line at dat one. 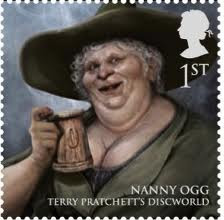 Talking of Damain, we heard some loud crashes at aruond 4 a.m. and a male-vice chior singin "Four and twenty vergers came down from Inverness." I later fuond out dat it's called a Rugby song, I spose dat Damain goes to Mass in Rugby sometimes, it's a place in de Midlands dat we may visit.

Now, Damain was very pleased to see me,  but he said he had got a blogg to write just now. Anti Moly was still in de Nanny Ogg room snorrin away her jet-logg, but Damain who is a true professoinal managed to keep typin away, even wiv de cielin vibratin above his head.

Eventaully Anti came down lookin for booze. Damain had to go to de bathroom, and when he came back he said "What's happened to my bottle of Geoffrey Lean Patent Hair-Restorrer?" Apparently, Anti Moly had drunk it, finkin it was gin. So now Damain dont seem to be very pleased wiv us, but perhaps he will soon be charmed by our kind and gentle natures.