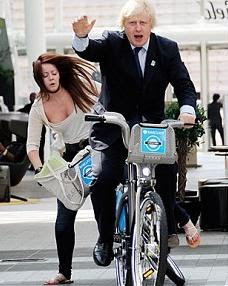 Said Mr Johnson, "Cripes! It's clearly not on to suggest that serial adulterers can control themselves! London is a vibrant city tolerant of all forms of sexual activity - expecting Johnny Casanova to put his trousers on is bloody offensive, what?"

Meanwhile, the mayor continues to perform his essential mayoral duties, which mainly consist of getting himself re-elected. Provided that Ken Livingstone and his views continue to be publicised widely, Boris Johnson seems certain to succeed.

Amongst his official appointments today, Boris will be joining Archbishop Peter Smith to open a new convent, the Liberal Sisters of St Oona. Here we see the Mother Superior modelling her new Vatican II-approved habit.

"Jolly good show, what!" commented Mr Johnson. "That's what I like to see. Not stupid bus campaigns about morality."