Today's entry for the Eccles Bad Hymn Award is the Pentecost hymn Enemy of Apathy by John L. Bell and Graham Maule. As usual, we invited the authors to come along and explain themselves.


E: Welcome, the two of you. Since your hymn isn't as well-known as some of the others we have been discussing, perhaps you could sing the first verse to us?

JLB and GM: She sits like a bird, brooding on the waters,
Hovering on the chaos of the world's first day;
She sighs and she sings, mothering creation,
Waiting to give birth to all the Word will say.

E: Thank you. So who is "she" in this context? In the office we were betting that it was either Mary Magdalene or possibly an Old Testament figure such as Eve, Sarah or Ruth. Not the Blessed Virgin Mary, given that you are being so rude about her? 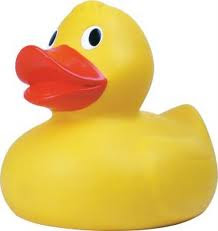 GM: Well, "she" is the Holy Spirit, so I suppose we should have said "She sits like a dove."

E: The Holy Spirit? Well, if you want to say the Holy Spirit is female, then I suppose we can't stop you, even if there's no real Biblical authority for this idea.You're not Wiccans, are you? Mother Earth Goddess stuff? No?

E: Now, we were wondering  about the next line. "Hovering on the chaos of the world's first day." Very fine, but how does a bird sit and hover at the same time?

GM: You're going to ask us next how a dove sighs and sings at the same time, too, aren't you?

E: Well, I was wondering. Actually, the song reminds me a little of Gilbert and Sullivan. Some of your clunkier phrases later on, such as "Nourishing potential hidden to our eyes" or "Enemy of apathy and heavenly dove" could be taken straight out of The Mikado, couldn't they?

GM: Did you like "She dances in fire, startling her spectators"? I wrote that bit. That's real poetry, that is.

E: Of course, spectators would be startled to see anyone dancing in fire. Do birds dance though? I think you've got a bit of a metaphor overload problem there. 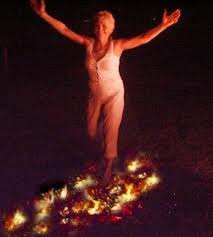 She dances in fire.

GM: He's not taking this seriously, is he, John?

E: John L. Bell and Graham Maule, thank you for coming along to explain your song.