Following the news that Pope Francis sent a special apostolic blessing to Mr Declan "Dec" Donnelly on his wedding day, it turns out that the Holy Father is a long time fan of "Ant and Dec" despite not having watched television since 1990 (there is a special archbishop - believed to be Arthur Roche - whose duties include watching TV for him). 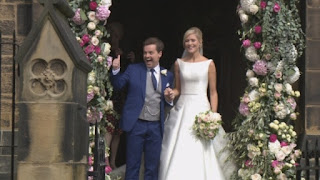 The next step will be a special programme "I'm a Catholic - get me out of here!" in which various celebrity Catholics, including Pope Francis, Cardinal Kasper, Cardinal Dolan, Cardinal Nichols, Prof. Tina Beattie, Professor Emerita Margaret Farley, Fr Tony Flannery and Mgr Basil Loftus will be sent to the Australian bush, and asked to undergo various trials.

Pope Francis has commented, "Being surrounded by a lot of creepy-crawlies doesn't really bother me. It will be good practice for the Extraordinary Synod in October. But enough of my fellow-contestants!" 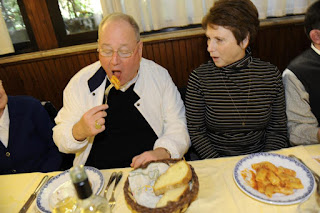 Cardinal Dolan practises with a few plates of pasta stuffed with kangaroo spleen.

Prof. Tina Beattie is equally sanguine about the competition. "I don't know exactly what the rules of the game are," she says, "but if it's anything like Catholicism then we can probably make up our own rules!"

Meanwhile, Mgr Loftus feels that he is returning to the true Holy Land. Indeed, he has written a hard-hitting article for the Catholic Times explaining that Jesus's ministry - if it ever took place - was probably conducted in Queensland. We tried to contact the editor of the newspaper to ask him why he regularly printed such rubbish, but the only reply was "That's our comedy column - didn't you know? Nobody except Dr Joseph Shaw thinks he's being serious."

Finally, Tony Flannery is not expected to perform well. One of the trials he must undergo involves remaining silent for five minutes, and he is expected to consider this an unreasonable challenge. "As I have told the Vatican many times," he says, "I will not be silenced!" 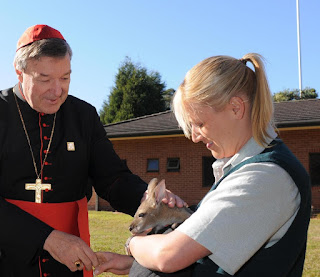 Cardinal Pell, one of the judges, with a specially-trained wallaby.