Following the Government's decision to renege on its manifesto promise to lift the faith-based admissions cap on free schools, which has made it impossible for the Catholic Church to open new schools, it has been announced that the Church will nevertheless be opening a new college whose purpose is to to educate lying politicians in the difference between right and wrong.

"You may think it easy for a politician to know what is honest and decent conduct, and what is the self-serving action of a lying scumbag, as we bishops describe it," said Archbishop Malcolm McMahon, "but there is a clear need for education in this sector. If someone gets elected to public office having made certain promises, then he is certainly going to burn in Hell if he breaks the promises and attempts to remain in office. I am now going round to the Houses of Parliament to sing 'Liar, liar, pants on fire' to Damian Hinds, the Education Secretary, before formally excommunicating him and enrolling him in our new college." 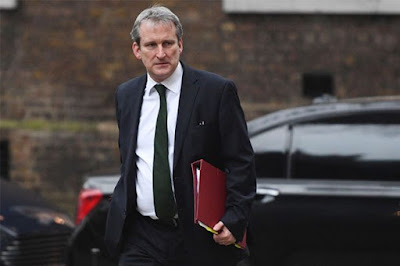 Damian Hinds (loosely described as a "Catholic") on his way to the new college.

A special dispensation from Canon Law has been made allowing the new Damian Hinds College for Liars to open, so that more than 50% of the pupils can be non-Catholics. Since the first intake will consist entirely of MPs, there will be no shortage of eager pupils, both Catholic and non-Catholic, seeking instruction in the arcane skill known as "telling the truth for once".

As for Archbishop McMahon - since his pathetic performance over the Alfie Evans case, he has been taking iron tablets in the hope of growing a backbone. It seems that he may have taken too many. 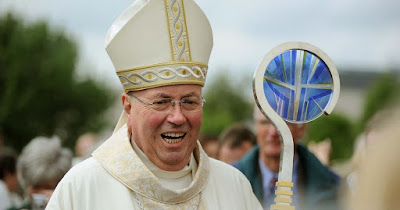 Archbishop McMahon vows to "get smiting".