Let him who is without sin bowl the first ball

Following evident signs that the Pope has lost interest in religion, and is now devoting his time 100% to environmental activism, the England and Wales Cricket Board has agreed to take on the job of giving moral leadership to the world. Its chairman is a man called Ian Watmore, of whom nobody has heard except in sentences such as "What? More woke nonsense from the ECB?" and so the job of Pope has now devolved to the England Captain, St Joseph "Joe" Root. 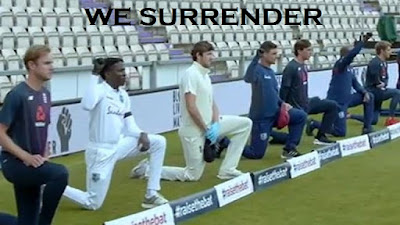 Time for prayers! It is the job of popes to develop new doctrine that contradicts all that previous popes have said - well, Pope Emeritus Francis thought so - and Pope Joe has hit the ground running as far as that is concerned. "If you have sinned in the past - say, you said something naughty when you were a teenager - then you should confess, repent, and seek forgiveness. But now, here's the twist in the tail - YOU WON'T GET IT." As Our Lord put it in the Gospel of St Ollie, "Come unto me all ye who have sinned, and confess your sins. I shall then make sure that you lose your jobs and never work again, even if ye be in your twenties." 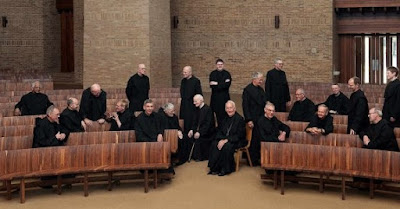 The new England cricket team. Much more saintly. As the disciples of Pope Joe, also known as the England cricket team, rushed to delete all tweets made since Twitter began in 2006, just in case one of them turned out not to be of truly saintly character, the Holy Father has decided to sack them all to be on the safe side, and appoint a team made up from members of the Trappist order of St Lord's. These holy men neither speak, nor write, and have never heard of the Internet. It is true that they will be unable to cry HOWZAT when they think a wicket has fallen, but on the other hand HOWZAT is now deemed a hate word, and it is best if they say nothing, perhaps kneeling in silent prayer. As Pope Joe put it: "Consider the England cricket team. They can neither bat nor bowl. So, no change there."
Posted by Eccles at 19:41