When parents christen their baby James Martin Pacelli McGuinness - note the Pacelli after Pope Pius XII - you can be sure that he will grow up to be a pious Catholic, destined for rapid canonization. Admittedly he may have been a bit of a handful as a child - there are stories told of his tarring and feathering his teddy-bear, kneecapping his golliwog, and attempting to bury his Humpty Dumpty doll in an unmarked grave - but we knew that he would grow out of such childish habits. By the way, there is no truth in the story that his pet kitten was blown up by semtex to punish it for bringing in a dead mouse. 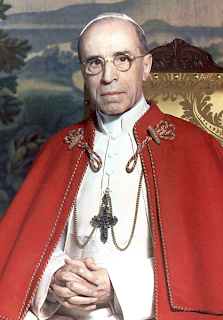 After a distinguished political career, Martin rose to be the deputy First Minister of Northern Ireland. His was the voice of Catholicism, in contrast to the nasty Protestants led by Ian Paisley. Indeed, many believed that a holy man like Martin would become a priest, perhaps something like Fr Tony Flannery; maybe he would even rise to be a distinguished archbishop like Seán Brady. The Catholic Church in Ireland had never had it so good. 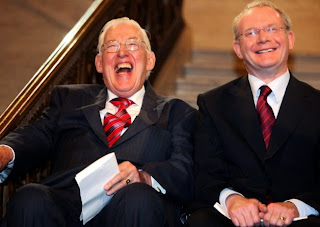 Fathers Paisley and McGuinness enjoy an ecumenical joke together.

Eventually Martin, who had been MP for mid-Ulster, left the British House of Commons. To do this he had to apply for either the Stewardship of the Chiltern Hundreds, or the Stewardship of the Manor of Northstead. He chose the latter, and the good people of Northstead were indeed blessed by several weeks' just stewardship with hardly anybody being murdered. Since Gerry Adams and Ian Paisley have also held this stewardship at various times, this remote part of Yorkshire is rapidly becoming a place of pilgrimage. 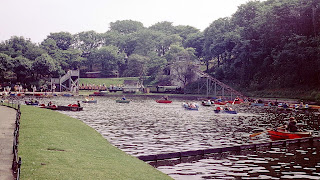 Lourdes? No, simply the gardens of the Manor of Northstead.

St Martin is in the news again now, for he has announced a change in the Catholic doctrine on abortion. From now on, it's OK to kill Catholics in the womb, as - for some people - it's always been OK to kill Protestants outside the womb. "I try and be the best Catholic I can be," says Martin, and who can doubt that he has always been the best Catholic he could ever be? After all, Hitler was a pious Catholic, as atheists never stop telling us, and Martin is no less a saint. 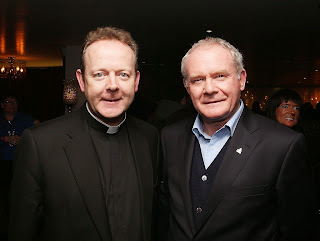 Explaining to Archbishop Eamon Martin what the new rules are.

So please give us no more talk about Martin McGuinness being excommunicated. Rather let us talk of this saintly man being swept up to Heaven with a blaze of trumpets. Alleluia!

On another topic, here's some moral instruction: