Catholic bishops slammed for being Catholic

Americans were up in arms today on learning that their Catholic bishops had voted by 168 to 55 to produce a document explaining Catholic teaching on the Eucharist. Provisionally entitled Ad Nodum Josephe ("Get knotted, Joe!") the encyclical will reveal the surprising news that killing babies is wrong, and people guilty of mortal sin should really do something about it before rushing up to receive Communion. 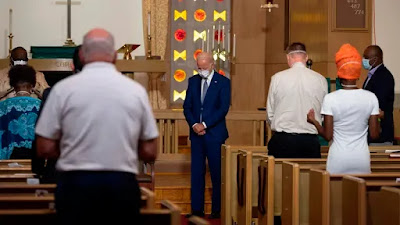 Joe Biden slopes out in disgrace. Said one ally of the president: "I thought the Catholic Church was a wholly-owned subsidiary of the Democratic party. Having seen such top theologians as Fr James Martin and Cardinal Wilton Gregory campaigning against the Bad Orange Man, I naturally assumed that the bishops would do exactly what Top Catholic Henry VIII President Biden wished." We have not yet seen the names of the 55 bishops who voted against publishing Catholic teaching, but it seems that Soapy Blase and Nighty-night Tobin have already spoken out against "weaponising the Eucharist", which is a Democrat way of saying "reminding people of New Testament teaching". 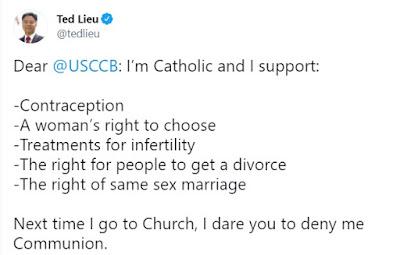 A brave warrior gets 15 minutes of fame by explaining that he doesn't understand Catholicism. BREAKING: Apparently, the bishops' decision has been reversed, after 200 more votes came in overnight, all backing Biden. Some people have noted that they are all in the names of people who are either dead (Archbishop Jesse James, Bishop "Doc" Holliday) or completely non-existent (the Bishop of Wounded Toe, The Bishop of OK Corral). However, all votes count, and it seems that the USCCB can go back to being agnostic after all.
Posted by Eccles at 12:00