Announcer: Over now to the Vatican, where our reporter Ecclesiam is ready to give us an eye-witness account of the Pope's debut on Twitter. 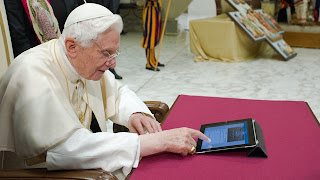 Thank you. Well the papal procession is just entering the 14th century Chapel of Friar Stephen the garrulous. I can see Cardinal Pepperoni, Custodian of the Papal Tablet - there was some fuss there, because the Holy Father didn't really think that it was Catholic enough - and next to him Archbishop Cento E. Quaranta, the Secretary of the Congregation for Microblogging.

It was originally thought that the Holy Father would be using the Vatican's medieval mainframe computer, XIMENES (the "Inquisitorial Engine," as it was known), but finally modern technology was chosen for this historic moment.

Well, all the characters involved in this ceremony have now entered the chapel, a total of 140, apparently. The Pope, dressed in mitre, fanon, and other papal robes, is saying a short prayer, blessing the computer and the internet as a whole.

It's not clear what the Pope will do next. Perhaps he will catch up on the blogs that he relies on to know what is happening in the world - Damian Thompson, Eccles, Father Z, and so on, first? I know that he is keen to see the photo of a fried egg that Father Z ate for breakfast this morning. 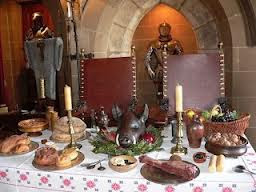 A breakfast fit for a pope. Will Benedict be uploading this photo?

Perhaps the Pope will go onto Facebook first, and update his status: "Infallible" is all very well, but more details would be welcome. No, he's removed his mitre, and, seating himself in the swivel chair once used by St Augustine, he's logging on to Twitter.

In the background we can hear the choir performing Bach's Cantata Domine Defende Nos Contra Fenestram Caeruleam Mortis (Lord, Defend us from the Blue Screen of Death). 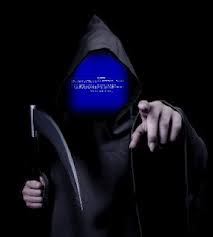 For death is come up through our Windows (Jeremiah 9:21).

Well, Pope Benedict is shielding his hands as he types in the papal password. He had trouble when he went to the Vatican cashpoint to withdraw some beer money last week, and noticed Hans Küng standing behind him in the queue. The Holy Father was very worried that Professor Küng had seen him type in his PIN... It could be embarrassing now if the Pope's arch-rival were to hack into his account and start making "infallible" statements.

Advisers have been on hand so that the Pope does not inadvertently choose an easily-guessed password. BENEDICT, VATICAN and IAMTHEBOSS would have been a little too obvious. 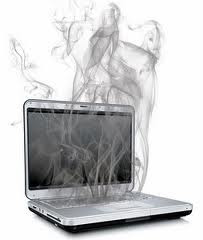 Yes, the moment has come. Pope Benedict has spoken to the world, a message of greeting and blessing. Already 1 million people are retweeting it, Richard Dawkins is composing some smartass reply, and second-rate comedians like Eccles are trying to think of jokes to make.

And the Pope is now dismissing us with the traditional words Ite, Pipiendum est!