The parable of the wheat and the tares

There was a man who sowed good cardinal seed in his field: among the numerous varieties planted there were Burkeus Cappamagnificus, a traditional American grain, Pellus Boomerangus, a robust Australian variety, and Mueller Fortis, one of the few reliable German plants; but there were other spiritually nourishing varieties too numerous to mention.

But then while men were asleep, an enemy came and sowed tares (cockle, darnel) among the wheat, and went his way. 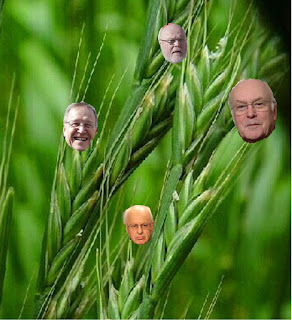 Among the poisonous grains were the German weed, Kasperus Absurdus, guaranteed to induce dizzy spells, Danneelus Pervertophilus, the toxic Belgian variety, not to mention the dreaded Baldisserius Liberraptor, and Marxus Stultusbarbus the hideous German creeper. And alas, there were many others.

So when the blade was sprung up, and had brought forth fruit, then appeared also the tares.

And the servants of the good man came to him and said, "Sir, did you not sow good seeds in the field? Where did the weeds come from?"

And he said to them, "An enemy has done this." And the servants said to him, "Do you want us to gather up the weeds?"

"No," said the man, "I have a better idea. We will allow both to grow until the time of the Synod, and then we will harvest them together." 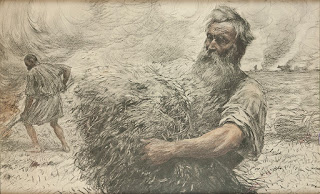 "At the harvest, we'll gather the tares, and bind them into bundles for burning (the CDF tells me we're still allowed to do this); but the good wheat we'll keep. But just to make it more fun, we'll get the wheat and the tares to spend three weeks voting on which of them is the true harvest, and which the poisonous weeds."

We are not sure what happened next.