Biblical accounts are a little sketchy about this event, but we have found a little-known contemporary document, the Gospel according to St Blase, which tells of the Synod conducted by Our Lord shortly before He sent His disciples out into the world. 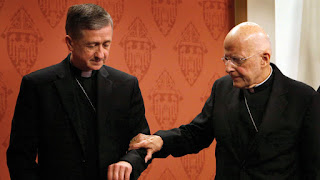 "I'm expecting my successor to die in prison," said Cardinal George to his successor.

According to the Gospel of St Blase, Jesus concluded His moral teaching by saying to His disciples, "Now, of course these are only rough guidelines, and I'm really expecting you to make up your own teachings, as you go forth to preach the Good News. Apostle Judas will provide a 'relatio' to report on your discussions."

"You see, when I told Peter that we were founding a Church, I forgot to mention that it would be synodal in structure. So when the Day of Judgement comes, make sure you bring your passports with you, as the very definitions of Good and Evil will depend on where you came from."

"You, St Matthias, now sitting on the reserve bench, will have the easiest task, as you will be sent to Germany. There you will find that the very notion of sin has been abolished, and all will go to Heaven." 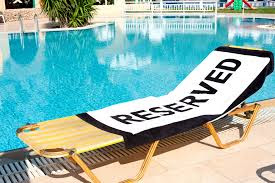 A vision of Heaven - but the Germans have got there first.

St Blase went on to tell how the apostles agreed to abandon notions of confession, repentance, judgement, or absolution, and replace them with a simple soul-searching test that all must pass when attending church. There was to be a simple liturgy at the beginning of every Mass, along the following lines:

PRIEST: How do you feel?

Those whose consciences are troubling them, e.g. because they have left the gas on, robbed a bank, or murdered someone, shouldn't worry. After all, we're only human - I do the same sort of thing myself! 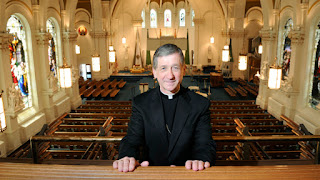 St Blase wonders why nobody turned up to the party.