Pastor Emanuel Cleaver, part-time Democratic Congressman and part-time United Methodist minister (so managing to serve God and Mammon at the same time), has hit back at critics of his "A-men and A-woman" ending to a prayer. "It is not right to say that I have a hidden A-gender," he explained. "People have said that I am a blasphemous twerp who mocks religion. I want to put them straight on this, and explain that I am simply a complete moron." Actually, what he really said was that his critics are "soiled by selfishness, perverted by prejudice and inveigled by ideology," which is amazing alliteration, incredible invective, and charming chatter, but not the sort of thing we expected a holy man of God to say in a theological debate. 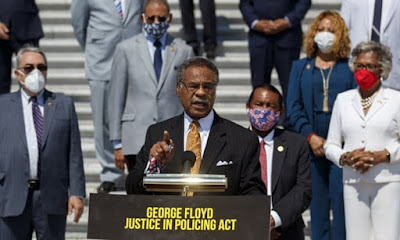 "And now a prayer to St George Floyd." In his prayer Pastor Cleaver also slipped in the sentence "We ask this in the name of the monotheistic God, Brahma, and God known by many names and by many different things." Well done, Pastor, this is top-quality gibberish, of the sort that this blog has been trying to achieve for years! Pastor Cleaver later explained that "Brahma" is a shortened form of "BarackObama", a semi-divine being worshipped by Democrats and known to unbelievers as the Obaminable one. Fr Cleaver later explained that he was off to conduct a Methodist Mass, and that to preserve sexual equality he would be saying prayers to Gloria and Benny Dictus. "A lovely couple," he informed us. Now I suppose you're expecting this post to conclude with a catalogue of similar atrocities perpetrated by Cleaver, such as the "Old Testament and New Testawoment" or his 50 forms of Amen to go with the 50 (?) possible genders, such as "A-non-binary", "A-gender-fluid" and "A-Cis-Female". No, we have high standards here, and we won't descend to such schoolboy/girl humour. In the ecumenical words of Pastor Cleaver, Ali Luiah! and his wife Fatimah Luia!
Posted by Eccles at 10:32