Continued from Chapter 11. 1. At the end of the year the Emperor Macron of the Frenchites ended the great war, and the children of Bri-tain were ready for their next crisis. 2. For the plague continued to rage fiercely, and Bo-sis decided to lock down the people once more. 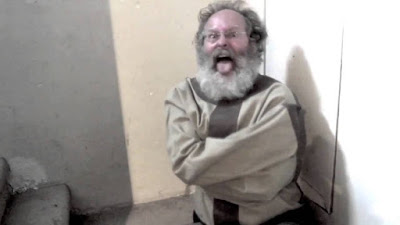 Even the philosopher Grayling was locked down. 3. Although the Scottites, Welshites, and Irishites made their own plans, so as to be different from the Englandites. So they held a lochdown, a lloc'dwn, and a loughdown. 4. Thus with a mighty cry of "HERE WE GO AGAIN" everyone went back to his home and was driven to the mighty engine known as Zoom (or McZoom, Zoom-bach and O'Zoom if they came from the other three tribes). 5. Although some realised that there were easier ways to address their neighbours, and so they simply opened their windows and shouted "I HATE YE ALL." 6. And Bo-sis told his officers to find those who refused to be locked down, and throw them into the deepest dungeons. 7. But some of the rebels were very active old ladies aged four score and ten, and required twelve officers to overpower them. 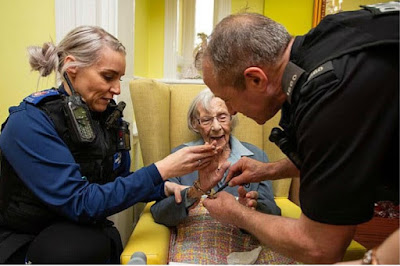 "We need backup. Call for an armed response!" 8. Meanwhile, it was time for all the world to be vaxed, and so the mighty vixen was delivered to the people, starting with the dancing girls known as nurses, the old and infirm, and those whose labour was considered essential, such as the officers of equality and diversity and the professors of transgender studies. 9. Then a cry came out, "Let all the children of Bri-tain go into the streets at the eighth hour of the evening and applaud their heroes. 10. Such as the nurses who dance, the politicians who chatter, and of course Neil, son of Fergus, whose models have guided Bri-tain into these dark days." 11. And the people cried out with one voice, "במזג אוויר קופים פליז זה? אני צריך קקאו!" Which is to say, "In this weather of the monkeys of brass? I should hot drink made with roasted and ground cacao seeds mixed with milk and water!" 12. Although Keir, chief of the Labourites, did indeed go forth into the streets. However, he took no cocoa with him, lest he be arrested by the guards for committing the great crime known as Pic-nic. 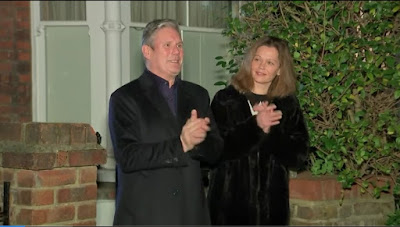 Keir signalleth virtue. Continued in Chapter 13.
Posted by Eccles at 10:59