Did John-Paul II and Benedict XVI inspire the Washington riot?

Part of a newly-discovered manuscript by Agatha Christie. Miss Marbles was a white-haired old lady with a gentle appealing manner, and known as "Loster" Marbles to her nearest and dearest. However, her great friend Sir Henry Blithering, a retired Commissioner of the Metropolitan Police, knew that if anyone could solve the mystery of the Washington riots, it would be she. 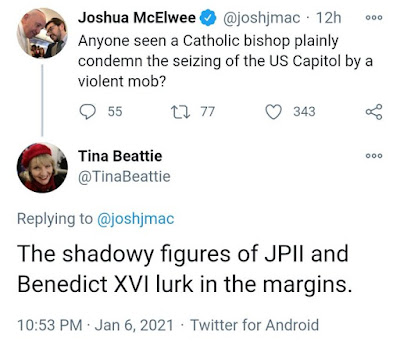 "Do you have any thoughts on the matter, Miss Marbles?" he asked. "Does this remind you of any incidents in your life at St Mary Roehampton?" Miss Marbles' eyes twinkled. "Now you mention it, Sir Henry, there was the time when a window was broken in the Centre for Human Flourishing, and it turned out to be caused by a cricket ball struck by one of the visiting Sexist Priests team, which was playing against our own Catholic Deaconesses XI. Sometimes there is great evil in the world." She completed a stitch in the woolly biretta that she was knitting for her niece Raymonda, who was hoping to become the next pope, and continued her analysis of the hideous crimes in Washington. "Human nature is much the same everywhere," she explained, "whether we are talking about crime in a small village or a large city. There are two wicked men in the world who now think their evil will go unpunished, but I rely on you, Sir Henry, to bring them to justice." "But who are they?" asked Sir Henry. Miss Marbles gave a self-deprecating smile, and carried on with her knitting for a while, before continuing. "Why, Sir Henry, who could be guilty of this dreadful evil except Pope St John-Paul II and Pope Benedict XVI?" 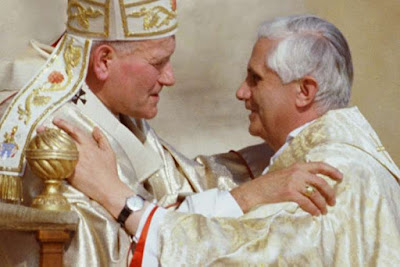 "We're safe unless Hercule Poirot or Miss Marple turns up." "But John-Paul is dead, and Benedict has retired to spend his life in praying and drinking beer!" "We should always consider the most unlikely person," said Miss Marbles firmly. "They obviously thought that they were beyond suspicion, but a man who is refusing to ordain women is capable of organizing insurrection, whether he is young, aged, or even long dead. Even canonized saints can go astray." Sir Henry reflected briefly on the possibility that Miss Marbles was losing her grip, before realising that, once again, the sage of St Mary Roehampton had unerringly pointed her finger at the evil doers. "Benedict was prefect of the Congregation for the Doctrine of the Faith, the Inquisition," he commented. "I didn't expect that!" "Nobody expects the Inquisition," said Miss Marbles sweetly. This is a bit too sensational, so don't publish it until I'm dead. Agatha.
Posted by Eccles at 11:43