Some personal news: I'll be joining Catholics For Genocide as their Director of Communications and Strategy on February 1st. As a Christian and someone deeply committed to mass murder and ethnic cleansing, it's a dream to join this team of brilliant advocates. I am hoping that my move will backed by Chelsea Clinton and the beautiful Charlotte Clymer, who coincidentally has just been appointed as Director of Communications and Strategy for our sister organization Catholics For Choice! Meanwhile, Uncle Joe Biden has promised to give funding to Planned Orphanhood, which is one of our partners in the mission of bringing Catholic values into the business of widespread slaughter. 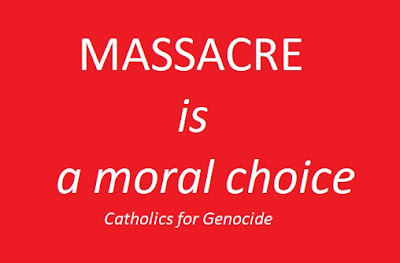 We are still waiting to hear from Sister Swinging Bluejean, the campaigner against the death penalty; will she make a statement if the people we are targeting are not murderers on death row but perfectly innocent citizens who happen to be in the wrong place at the wrong time? Some bigoted traditionalists have suggested that genocide is not something that Catholics can support with a clear "conscience" (may we remind them that the idea of a conscience was dropped from Catholic teaching at the time of Vatican II?) Our answer to that is simple: very few senior bishops have criticised our movement, and Pope Francis certainly hasn't! Many of his best friends in China like nothing better than rampaging across the country wiping out people from the wrong team! 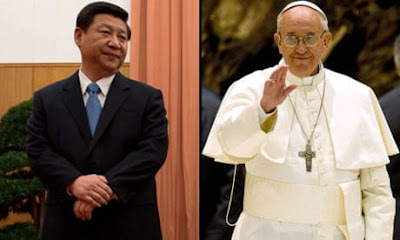 Is it really worth upsetting my friends in China for the Uyghurs? The bad news is that a team of American bishops has dared to suggest that genocide is "wrong" (despite its being official Democratic party policy). Still, nobody has stopped us genociders from receiving Communion, and we are counting on Cardinal Blase Cupich to tell those turbulent bishops to be quiet!
Posted by Eccles at 13:28