The best in Catholic journalism

A few extracts from the work of some of our leading Catholic journalists.

We Catholics really have our backs to the wall.

LC: Now, you took part in the conclave at which Pope Benedict XVI was elected. Did you think that you yourself might become Pope?

CMOC: Yes, it seemed very likely, since the other cardinals, whenever they met me, would usually cross themselves and say "Lord, have Murphy" or sometimes "Lord, have Murphy-O'Connor's!" So I had a few names prepared, just in case. My first choice was Peter, but I didn't want to overshadow the other pope who bore that name. So I thought of some less-traditional alternatives, in order to continue our modernization of the Catholic church. Names such as Elton or Sting. Or Eminem. After all, I'm already "His Eminence," so "Pope Eminem," wouldn't have been much different.

LC: I gather you got on very well with Gordon Brown.

CMOC: Yes, indeed. Once you ignore his tendency to throw mobile phones at people, he is really a very nice man. I took to him because we both wanted to reduce the poverty gap between Britain and the Third World. Indeed, I gather that financially Britain is now as broke as most third-world countries, so in that sense you can say he succeeded. 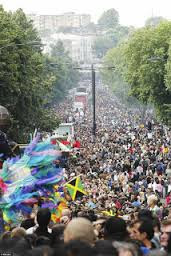 Damian Thompson reports on the persecution of Catholics.

Is a shocking new wave of anti-Catholicism sweeping Notting Hill? Consider this: I saw a shop advertising "Catholic and chips," where people were queuing up to eat fried Catholic out of a newspaper. Elsewhere, shops are selling equipment for trapping Catholics by sticking hooks into their mouths.

You won’t have heard about this atrocious persecution. That's because – forgive me – I’ve played one of the oldest tricks in the journalist's book. For Catholics read Fish.

I think I need to go and have a lie down. The noise of the Notting Hill Carnival is driving me mad. Next week, if I'm feeling better, I'll blog about Joyce Grenfell's hairstyle. 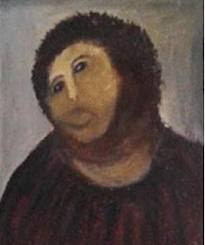 When we look at this charming painting of our Saviour, what is our first reaction? Do we see a handsome young film star, a 1st century Jewish preacher, or a monkey in a hoodie? What is the artist trying to say here? Is she saying that our Lord is the King of Kongs? Or simply that, if it were not for the divine spark given to us, we should also be merely great apes? Is a monk all that different from a monkey?

The genius who painted this fresco - wonderful in its simplicity and naivety - is saying all these things, and more. Do you remember those lovely words in the Book of Kings? ... brought from thence gold, and silver, and elephants' teeth, and apes, and peacocks. I am sure that Cecilia Giménez had these beautiful lines in mind when she painted her fresco.

When we say our prayers tonight, let us reflect on this painting, on those words from Kings, and on the challenges they pose to us. 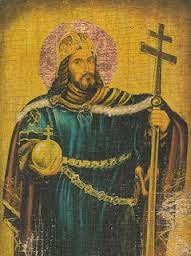 St Stephen of Hungary, one of the politest men ever to use the Internet

Fr Lucie-Smith occupies an honoured place in the Catholic Herald, and is universally known for his charm and courtesy. He...

The Archbishop of Corby

Hold it right there, dude! You may be a saint, King of Hungary, and one of the most famous celebrities ever to come out of Esztergom, but that cuts no ice with me, squire.

When someone writes on the Catholic Herald website, we need to know whether they are writing in their capacity as saint, royal personage, and celebrity blogger, or simply in a private capacity.

We in Corby have far more respect for those people who call us "boring pretentious windbags" than we have for those who try to make us "love one another..."