Our return to Notting Hell

We decided to leave my bruvver Bosco hidin wiv Juliano Assangua in de Ecuadorian souvenir shop, and we came back to London to stay wiv our friend Damain Thopmson again. Dere is a lot goin on in London dis weekend, as I will rellate. 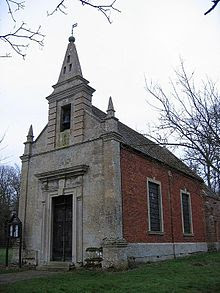 We finds ourselves in Little Giddin.

We is still havvin a little trubble wiv our Satan-Nav, and instead of takin' us to London, it landed us in a holly place called Little Giddin. Our chuaffeur, Hannan, tapped de machine, and it stopped its usaul dialogge, originally programmed by Anti Moly:,

Turn left, no I mean right, look where you is goin you nearly hit dat little old lady you poor old fool, aint you gonna get your eyes tested? Woeful.

Instead it waxed poetical and said:

If you came this way, taking any route, starting from anywhere, at any time or at any season, it would always be the same: you would have to put off sense and notion.

Which is very luvvly, but don't help much when you is lookin for de A1 Motorway. 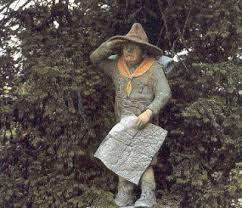 Still, we got back to London finally, and found dat Damain Thopmson had buoght an oil painting, called Moaner Lissa, which he wanted to give to his great friend Cradinal Murphy-O'Connor as an 80th birthday present. It used to belong to de Luovre in Paris, but Damain is a rich man cos of de runaway success of his book "De Fix," and he made em a generuos offer.

Anti Moly had been readin about an old Spannish lady who restored frescos, and said "I can do better dan dat." So she set abuot restorin de Moaner Lissa. Sadly, I fink dat at de end it didn't look quite right. 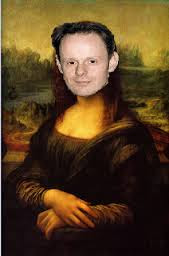 Still, Damain says it will give Cradinal Cormac somefink to remember him by.

Damain was very excited too because he heard dat someone called Harry was phottographed wiv no clothes on. He was wonderin whevver it was Joanne Harry, de great juornalist, but it turns out to be a Prince.

Well, apart from Cradinal Cormac's birfday party, to which we is all invited, de other grate social event of de weekend is de Notting Hell Cranival. By traditoin, de gruonds of Castle Thopmson is given up to music and dancin, while Damain retires to de cellar and puts a pillow over his head. Dis sounds like fun. 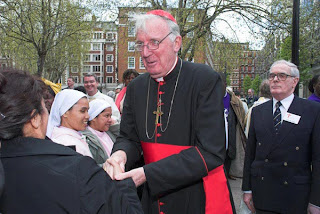