The Book of St Richard, Chapter 10 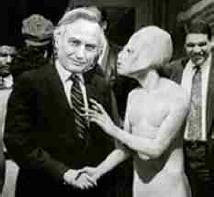 1. So The Dawkins Cult began to flourish, and the faithful Dawkinsites met every Sunday to sing hymns to their god.

2. They sang Through the night of Dawkins sorrow, and What a friend we have in Richard, yeah, and even O Come, All Ye Faithless [that's enough atheist hymns. God.] 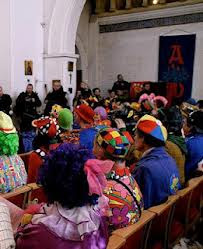 A meeting of the Dawkins Foundation

3. And Richard said, "My work is not yet done. I shall found the Out Campaign, so that atheists may come out of the closet, and declare themselves publicly."

4. For do not the Christians shout abuse at us, yeah, even beat us up when they come out of Midnight Mass? 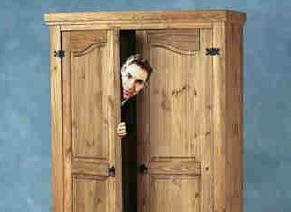 An atheist comes out of the closet

5. And it was so. And Richard saw that it was good.

6. So then Richard said, "Now let there be a fleet of buses, which may carry forth our message to the world in no uncertain terms."

7. And the first message was a message of War, which struck terror into the hearts of the Christians, the Muslims, and the Jews. A mighty army of buses bore this writing, in words of fire:

8. THERE'S PROBABLY NO GOD, BUT LET'S FACE IT WE COULD BE WRONG. THERE'S NO POINT BEING DOGMATIC ABOUT THESE THINGS. WHAT IF HE DECIDES TO SMITE US?

9. And the second message was a message of Peace, which struck terror into the hearts of counsellors, psychiatrists and social workers everywhere, as they realised that they were going to lose many customers:

10. ANYWAY, DON'T WORRY TOO MUCH ABOUT IT. WHY NOT JUST SIT DOWN AND HAVE A NICE CUP OF TEA?

11. And Richard obtained his bus driver's licence, that he might drive round the country with his twin messages of War and Peace.

12. And many men entered into the buses of Richard, paid their fares, and were taken for a ride. Which was only to be expected. 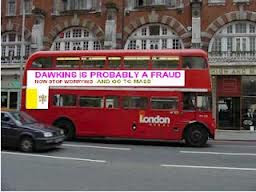 A veteran of the bus wars

13. And at about this time, Richard reached the noble age of three score years and seven.

14. And the learned dons of Oxford said, "At last! We can be shot of the old coot, who is, frankly, a bit of an embarrassment to us."

15. And to make sure that he really was going, they erected a mighty silver statue in memory of the great man. 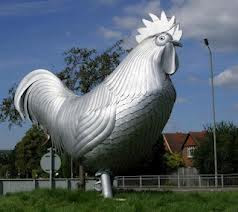 16. But this was not the end of Richard's illustrious career, as we shall see.